Zhihu which means "Do you know?" in classical Chinese, is the Quora of China: a question-and-answer website where all kinds of questions are created, answered, edited, and organized by the community of its users. As China's biggest knowledge sharing platform, we have 220 million registered users and 30 million questions with more than 130 million answers on the site. In August 2019, we completed $450 million in F-round funding.

At Zhihu, we used MySQL as the Hive Metastore. With data growth in Hive, MySQL stored about 60 GB of data, and the largest table had more than 20 million rows of data. Although the data volume was not excessive for a standalone MySQL database, running queries or writing data in Hive caused frequent operations in Metastore. In this case, MySQL, Metastore's backend database, became the bottleneck for the entire system. We compared multiple solutions and found that TiDB, an open-source distributed Hybrid Transactional/Analytical Processing (HTAP) database was the optimal solution. Thanks to TiDB's elastic scalability, we can horizontally scale our Hive metadata storage system without worrying about database capacity.

Last year, we published a post that showed how we kept our query response times at milliseconds levels despite having over 1.3 trillion rows of data. This post became a hit on various media platforms like Hacker News and DZone. Today, I'll share with you how we use TiDB to horizontally scale Hive Metastore to meet our growing business needs.

Apache Hive is a data warehouse software project built on top of Apache Hadoop that provides data query and analysis. Hive Metastore is Hive's metadata management tool. It provides a series of interfaces for operating metadata, and its backend storage generally uses a relational database like Derby or MySQL. In addition to Hive, many computing frameworks support using Hive Metastore as a metadata center to query the data in the underlying Hadoop ecosystem, such as Presto, Spark, and Flink.

At Zhihu, we used MySQL as the Hive Metastore. As data grew in Hive, a single table stored more than 20 million rows of data in MySQL. When a user's task had intensive operations in Metastore, it often ran slow or even timed out. This greatly affected task stability. If this continued, MySQL would be overwhelmed. Therefore, it was critical to optimize Hive Metastore.

To reduce MySQL's data size and ease the pressure on Metastore, we regularly deleted metadata in MySQL. However, in practice this policy had the following drawbacks:

Therefore, we began to look for another solution.

We compared multiple options and chose TiDB as our final solution.

We considered using MySQL sharding to balance the load of multiple MySQL databases in a cluster. However, we decided against this policy because it had these issues:

We thought we could scale Hive Metastore using Federation. We could form an architecture that consisted of MySQL and multiple sets of Hive Metastore and add a proxy in front of Metastore to distribute requests according to certain rules.

But after investigation, we found this policy also had flaws:

TiDB, with elastic scalability, is the perfect solution

TiDB is a distributed SQL database built by PingCAP and its open-source community. It is MySQL compatible and features horizontal scalability, strong consistency, and high availability. It's a one-stop solution for both OLTP and OLAP workloads. You can learn more about TiDB's architecture here.

As you recall, our problem was that when the data size increased, MySQL, limited by its standalone performance, could not deliver good performance. When individual MySQL databases formed a cluster, the complexity drastically increased. If we could find a distributed, MySQL-compatible database, we could solve this problem. Therefore, TiDB is a perfect match.

We chose TiDB because it had the following advantages:

Before migration to TiDB

Before we migrated from MySQL to TiDB, our Hive architecture was as follows. In this architecture, Zue is a visual query interface for Zhihu's internal use. 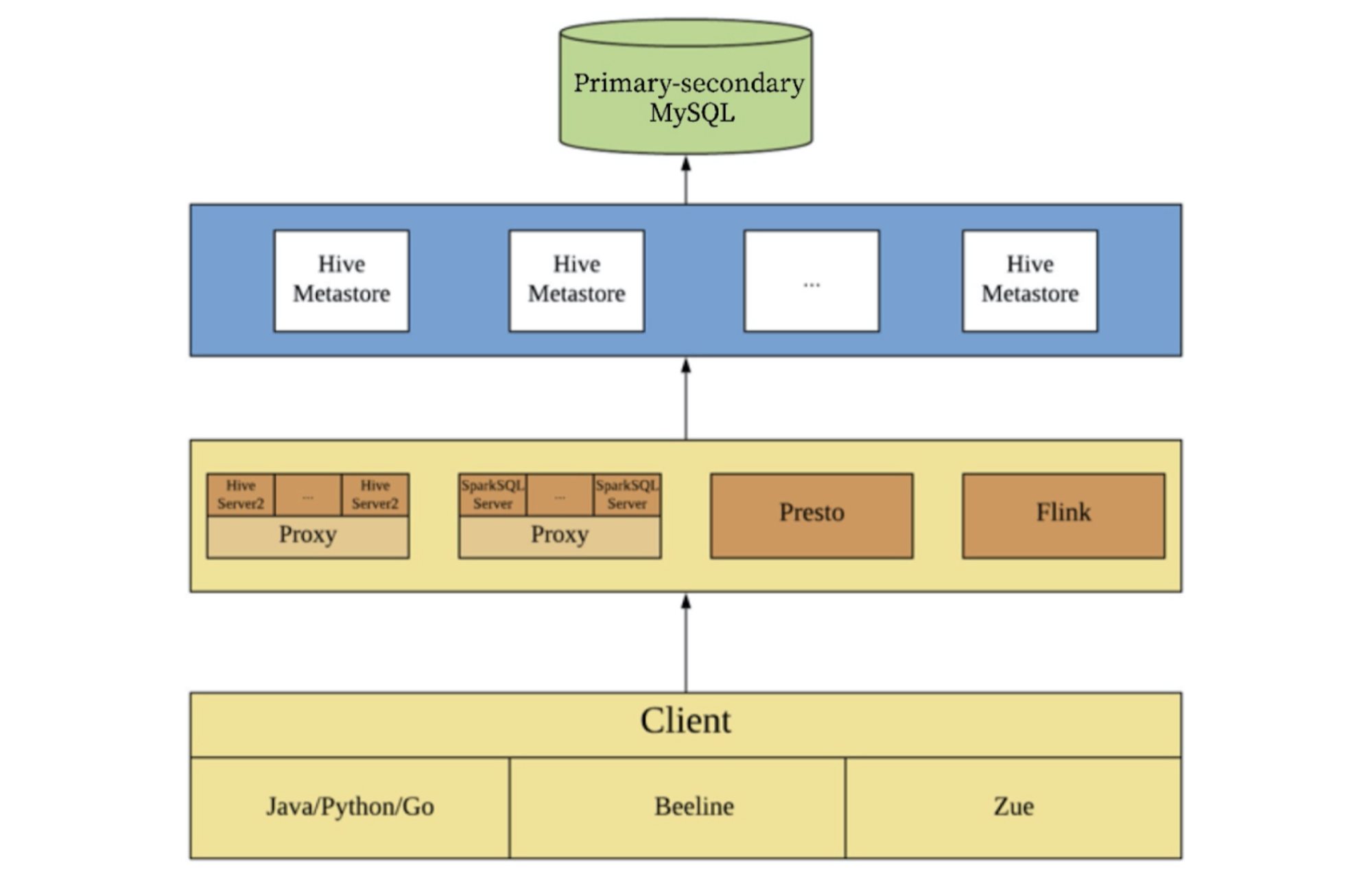 The Hive architecture before migration to TiDB

After migration to TiDB

After we migrated from MySQL to TiDB, the Hive architecture looks like this: 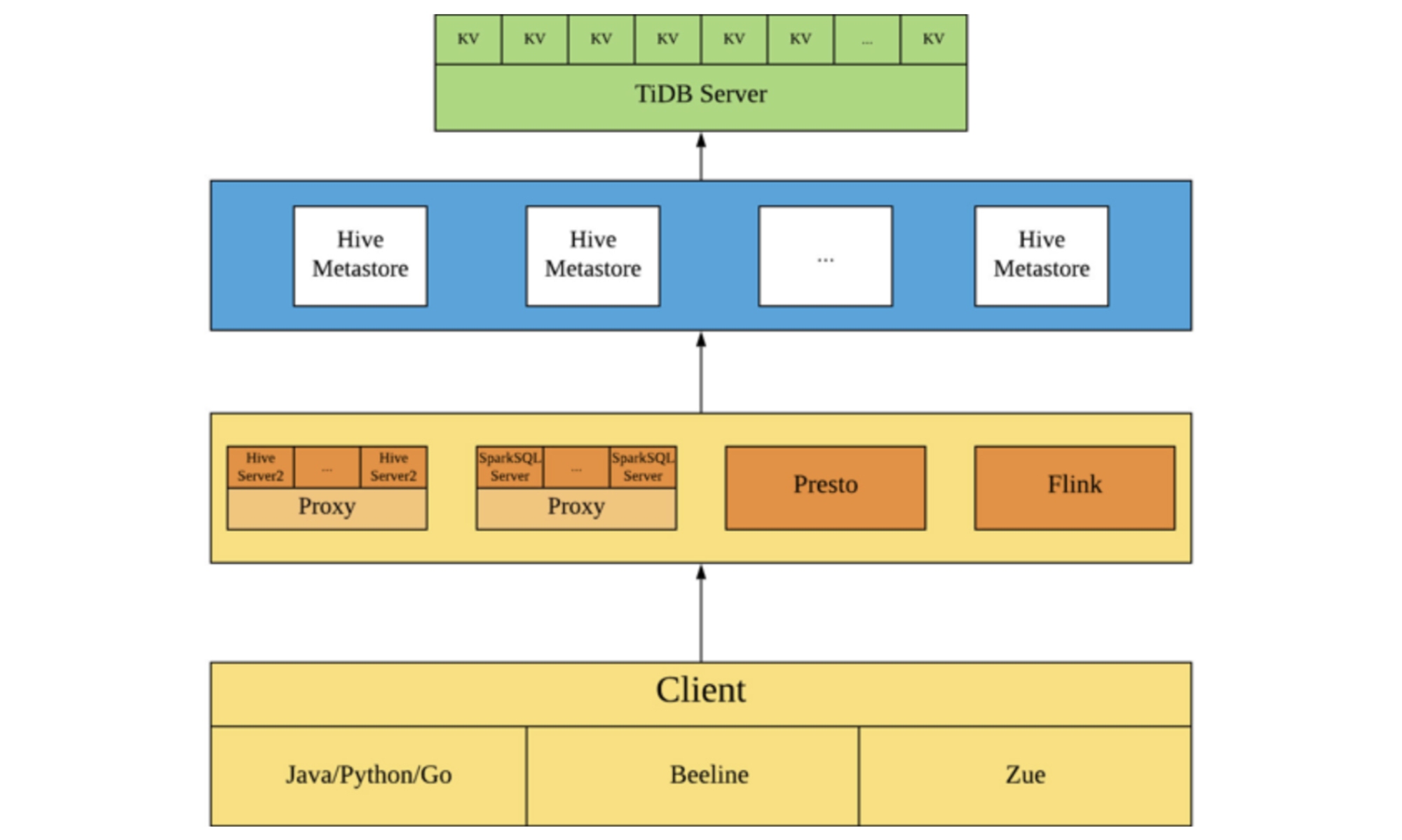 The Hive architecture after migration to TiDB

You can see that after we migrated metadata to TiDB, the architecture has almost no change. The query requests, which were on a single MySQL node, are now distributed in the TiDB cluster. The larger the TiDB cluster, the higher the query efficiency and the greater the performance improvement.

We migrated from MySQL to TiDB this way:

During the migration process, the application was not affected. Now TiDB successfully runs in our production environment.

We tested the database from the Hive level, simulated the application peak, and concurrently deleted and added partitions for tables with millions of partitions. We executed Hive SQL statements as follows:

The operation execution time dropped from 45–75 seconds before migration to under 10 seconds after migration.

The impact of large queries on the database

The safety data sheet (SDS) table, with more than 10 million rows of data, is one of the biggest tables in Metastore. The replication time of the SDS table in Metastore on the data replication platform was reduced from 90 seconds to 15 seconds.

In the Hive Metastore case, TiDB helps us horizontally scale our metadata storage database so we no longer need to worry about our database storage capacity. We hope that, in the future, TiDB can provide cross-data center (DC) services: through the cross-DC deployment of data replicas, TiDB could connect online and offline scenarios so we can do real-time extract, transform, load (ETL) tasks offline without causing pressure on online services. This will improve offline ETL tasks' real-time performance. Therefore, we're developing TiBigData.