Titan is a RocksDB plugin for key-value separation, inspired by WiscKey, a paper issued in USENIX FAST 2016. It's available for preview in TiDB 3.0. The goal of Titan is to reduce write amplification in RocksDB when using large values.

WiscKey is specifically designed for solid-state drives (SSDs). WiscKey separates keys from values, which generates random I/O that is not well suited for hard drives. Our internal testing indicates that when the value size in Key-Value pairs is large, Titan performs better than RocksDB in write, update, and point read scenarios. However, according to RUM Conjecture, improvements achieved in one are usually at the cost of another. The same is true with Titan -- it gets a higher write performance by sacrificing storage space and range query performance. As the price of SSDs continues to decrease, we believe this trade-off will be more and more meaningful.

As a child project of TiKV, Titan's first design goal is to be compatible with RocksDB. As the bottom-layer storage engine for TiKV and a mature project itself, RocksDB already has a large user base. These users should be able to seamlessly upgrade their RocksDB-based TiKV to a Titan-based TiKV. Therefore, we have developed the following design goals: 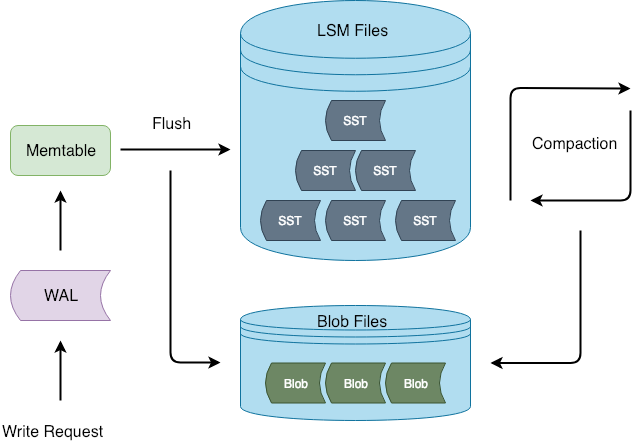 Figure 1. During flush and compaction operations, Titan separates values from the LSM tree. The advantage of this approach is that the write process is consistent with RocksDB, which reduces the chance of invasive changes to RocksDB.

Titan core components include BlobFile, TitanTableBuilder, Version, and Garbage Collection (GC). We will dive into each of these components in the following sections.

TitanTableBuilder is the key to achieving Key-Value separation. As you may know, RocksDB supports custom table builders for creating a Sorted String Table (SST). This feature let's us separate values from the SST without making any invasive changes to the existing table building process. Now, let's look at the TitanTableBuilder main workflow: 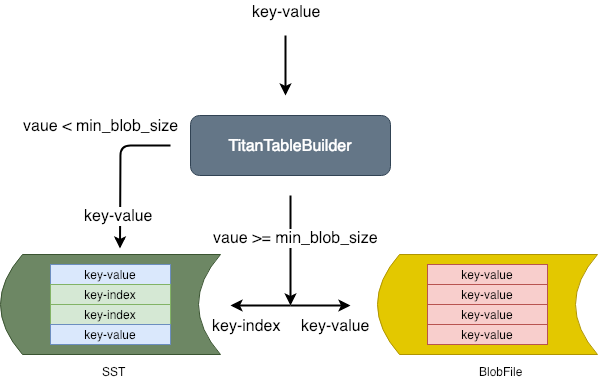 Figure 3. TitanTableBuilder determines the Key-Pair value size, and based on that, decides whether to separate the value from the Key-Value pair and store it in the blob file.

Titan's design differs greatly from Badger, which converts the Write-Ahead Log (WAL) into a Vlog to save overhead for a single flush. There are two main reasons why Titan takes a different approach:

Titan uses Version to refer to a valid blob file at a specific point of time. We draw this data management method from LevelDB. The core concept behind this method is Multi-version Concurrency Control (MVCC). The advantage of this approach is that it allows concurrent reads with no locking required when a file is added or deleted. Each time a file is added or deleted, Titan generates a new version. Before each read, Titan gets the latest version.

Figure 4. New and old versions form a head-to-tail bidirectional linked list. VersionSet manages all versions, with a current pointer that points to the latest version.

Titan uses Garbage Collection (GC) to reclaim space. When weighing write amplification and space amplification, an efficient GC algorithm should recover the maximum space with the fewest cycles. When designing GC, there are two major problems to consider:

Titan addresses these problems using two features of RocksDB: the Table Properties Collector and the Event Listener. Next, we will elaborate on how these two features assist GC.

On the right is the BlobFileSizeProperties format. Each line represents a blob file and how much data is saved in this blob file. The first column is the blob file ID; the second column is the size of the data.

As we know, RocksDB uses compaction to discard old data and reclaim space. After each compaction, some blob files in Titan may contain partly or entirely outdated data. Therefore, we could trigger GC by listening to compaction events. During compaction, we could collect and compare the input/output blob file size properties of SST to determine which blob files require GC. The following figure shows the general process: 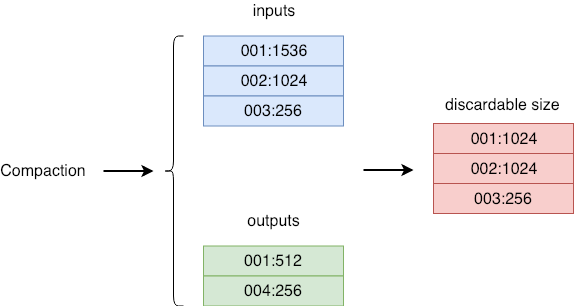 For each valid blob file, Titan maintains a discardable size variable in memory. After each compaction, this variable is accumulated for the corresponding blob file. Each time when GC starts, it picks the blob file with the greatest discardable size as the candidate file for GC.

Before each compaction, we pick a set of blob files as our candidates as described in the previous section. To reduce write amplification, we allow a certain level of space amplification, which means GC can be started on a blob file only when the discardable file has reached a specific proportion in size. We use the Sample algorithm to get an approximate proportion of the discardable data for each candidate file. The main logic with this algorithm is:

As mentioned in the previous section, there is a discardable size maintained in memory for each blob file. If the proportion of this value to the size of the blob file is greater than or equal to discardable_ratio, no Sample calculation is needed for this blob file.

We used go-ycsb, a GO port of YCSB, to test TiKV's performance in Transaction mode respectively on RocksDB and Titan. In this section, I will briefly describe our test methods and results. Because the length of this article is limited, we can only pick two typical value sizes for elaboration. Our next article will include a more detailed test analysis and report.

The ground rule for data set selection is that the original data size (write amplification ignored) must be larger than the memory available, so that we can prevent all data from being cached in memory and weaken the impact of cache. In our case, the size of the dataset we select is 64 GB, and the memory usage limit is 32 GB.

The test focused on the following common scenarios: 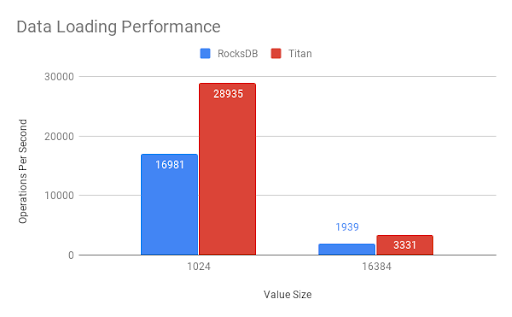 Figure 7. Data Loading Performance: Titan's performance is 70% higher than RocksDB in write scenarios. The gap becomes more evident as the value size increases. It's worth noting that data is first written into the Raft Log before the KV Engine, which dilutes Titan's performance. If we use both Titan's API and RocksDB API nakedly for the test instead of first going through TiKV's API, the performance gap is even bigger. 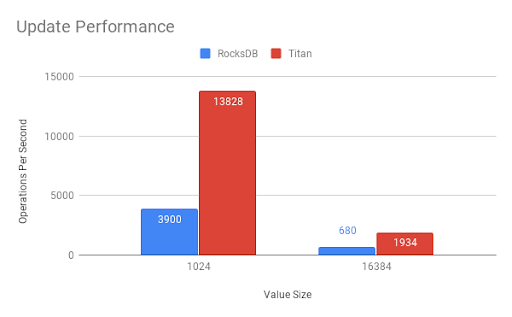 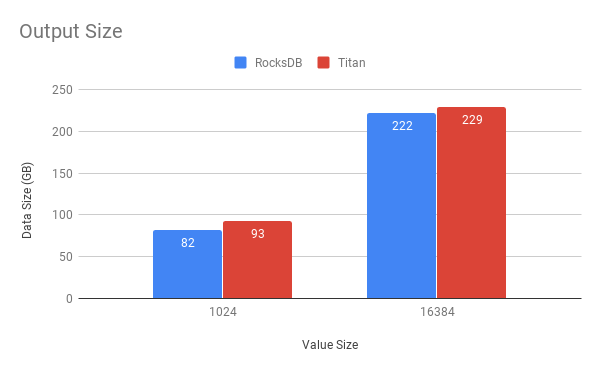 Figure 9. Output Size: Titan has a slightly higher space amplification than RocksDB. This is mostly a result of the write amplification caused by storage overhead for keys in the blob file. As the number of keys is reduced, this gap drops a little. 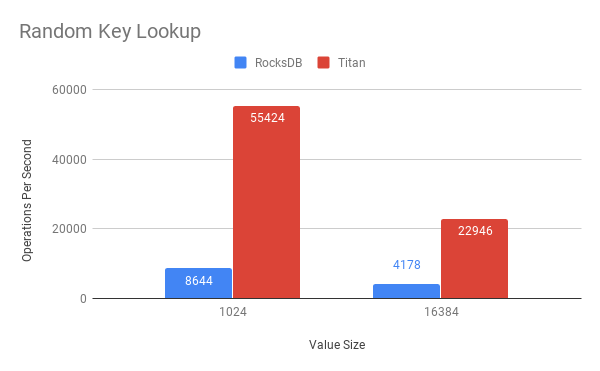 Figure 10. Random Key Lookup: Titan outperforms RocksDB in point query scenarios. This is due mainly to the design that separates values from the LSM tree to make the latter smaller. Using the same amount of memory as RocksDB, Titan allows more indexes, filters, and data blocks in block cache. Accordingly, most point queries require only one I/O (mainly for reading data from the blob file). 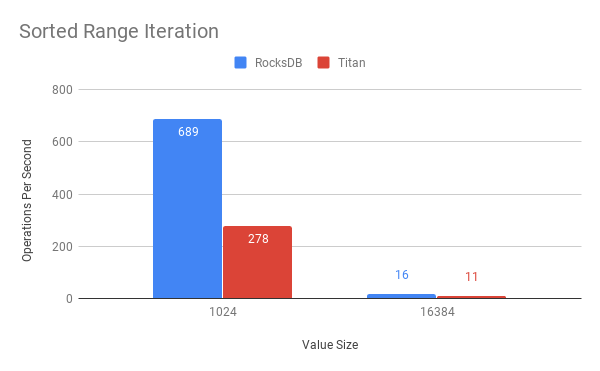 Figure 11. Sorted Range Iteration: Currently, Titan underperforms RocksDB in range query scenarios. In future optimizations, one of our goals is to improve this performance.

During this test, we compared performance differences for two typical value sizes in four different scenarios. Our next article will discuss testing for value sizes of different granularities and will include a more detailed performance report. We will also analyze the difference between Titan and RocksDB from more angles such as CPU and memory usage. From the current test, we can conclude that, for workloads with large value sizes, Titan outperforms RocksDB in read, write, update, and point query operations. However, Titan has a lower range query performance and more space amplification than RocksDB.

Since day one, our primary design goal has been compatibility with RocksDB. Therefore, we have retained most of the RocksDB APIs. Currently, there are only two APIs that we do not explicitly support:

All other APIs except the Open interface share consistent parameters and return values with RocksDB. Existing projects only require minor changes to upgrade RocksDB instances smoothly to Titan. However, it is noteworthy that Titan does not support rollback to RocksDB.

How to use Titan

To create a database, use one of the following methods:

Like RocksDB, Titan uses rocksdb::Status as the default return value for most APIs. You can verify the execution result or print the error message using the following command:

To destroy a database, use the following command:

Use Titan in TiKV

Currently, Titan is disabled by default in TiKV. We use the TiKV configuration file to determine whether to enable and configure Titan. The related configuration options include [rocksdb.titan] and [rocksdb.defaultcf.titan]. To enable Titan, configure it as follows:

Note: After you enable Titan, you cannot roll back to RocksDB.

Our test indicates a low I/O utilization when performing range queries with Titan, which explains the performance gap compared to RocksDB. This is why we believe that there is great room for optimization on Titan's Iterator. The simplest method is to choose a more radical prefetch technique or use parallel prefetching for better Iterator performance.

Generally, an overly low GC speed can lead to severe space amplification, while an overly fast GC speed has a negative effect on queries per second (QPS) and service latency. Titan currently supports automatic GC, which aims to limit GC speed to a certain extent by reducing concurrency and batch size. However, due to an unstable amount of blob records in each blob file, if blob records become overly crowded, the write requests of the business may still be congested when the corresponding valid keys are updated back to the LSM tree. To achieve fine-grained control over the GC speed, we intend to use the Token Bucket algorithm to limit the number of keys that GC can update within a specified period of time. This decreases GC's impact on QPS and latency and ensures a more stable service.

On the other hand, we are investigating algorithms that could adjust GC speed automatically. This could lower GC speed during service rush hours to provide more quality services, and speed up GC during non-rush hours to reclaim space faster.

In certain scenarios, TiKV only needs to identify whether a key exists or not instead of reading its value. We learned that after we separate values from the LSM tree, the latter becomes much smaller, and we can cache more indexes, filters, and datablocks in memory. Retrieving a key requires little or no I/O. By providing such an API, we could greatly improve performance.