In the cloud, databases are often deployed across more than one availability zone (AZ). That way, if one AZ fails, the database service can continue uninterrupted. However, cloud service providers charge more for cross-AZ traffic, so we might have to spend a fortune on clusters with heavy traffic. In extreme cases, these charges can make up 30%~40% of the total hardware cost.

Can we do something to lower this expense? Now we can. At TiDB Hackathon 2020, our team focused on reducing cross-AZ traffic for TiDB on the cloud. After a 24-hour Hackathon, we reduced cross-AZ read traffic by 89% and write traffic by 15%.

In this article, I'll show you our whole journey through TiDB Hackathon 2020. You will learn about:

Our project aimed at reducing cross-AZ traffic for TiDB on the cloud. TiDB is a cloud-native, distributed SQL database. Normally, when we deploy TiDB on the cloud, to ensure service availability when a single AZ goes down, we need to position three replicas on three AZs. As replicas communicate and sync data with each other, cross-AZ data transfer takes place.

Because cloud providers charge extra fees for cross-AZ data transfer, a large amount of cross-AZ traffic might bring you a large bill—sometimes taking up 30%~40% of the hardware cost. To reduce that cost, we need to minimize cross-AZ traffic.

TiDB uses the Raft consensus algorithm to guarantee data consistency between replicas. By default, three replicas form a Raft group, in which the elected Leader provides the read and write service, and the Followers replicate data from the Leader.

If we can address these three situations, we can reduce cross-AZ traffic.

The read-intensive workload is a common scenario. To reduce cross-AZ read traffic, we wanted to optimize queries that have a large result set.

Because the Leader replica provides all the read service, if a range scan operation needs to read a range of data whose Leader replica sits in another AZ, a large amount of cross-AZ traffic occurs. To reduce this type of traffic, we can actively make TiDB read data from the Follower replica in the local AZ. In addition, to make sure the Follower replica has the latest data, it sends a ReadIndex RPC to the Leader to obtain the latest commit index of the current Raft group.

The approach above can greatly reduce cross-AZ traffic caused by RangeScan. For RangeScan queries, an extra RPC adds very little traffic. A RangeScan request may have 100 times more traffic than PointGet, but its CPU consumption is much smaller—probably 4 times. Therefore, if we can compel the large queries to read data from a local replica, it would greatly reduce cross-AZ data transfer, while putting only small pressure on the local TiKV node.

Therefore, we developed the following strategy. When the TiKV node in the same AZ has idle resources, TiDB sends queries with a large result set to TiKV in the local AZ as much as possible. 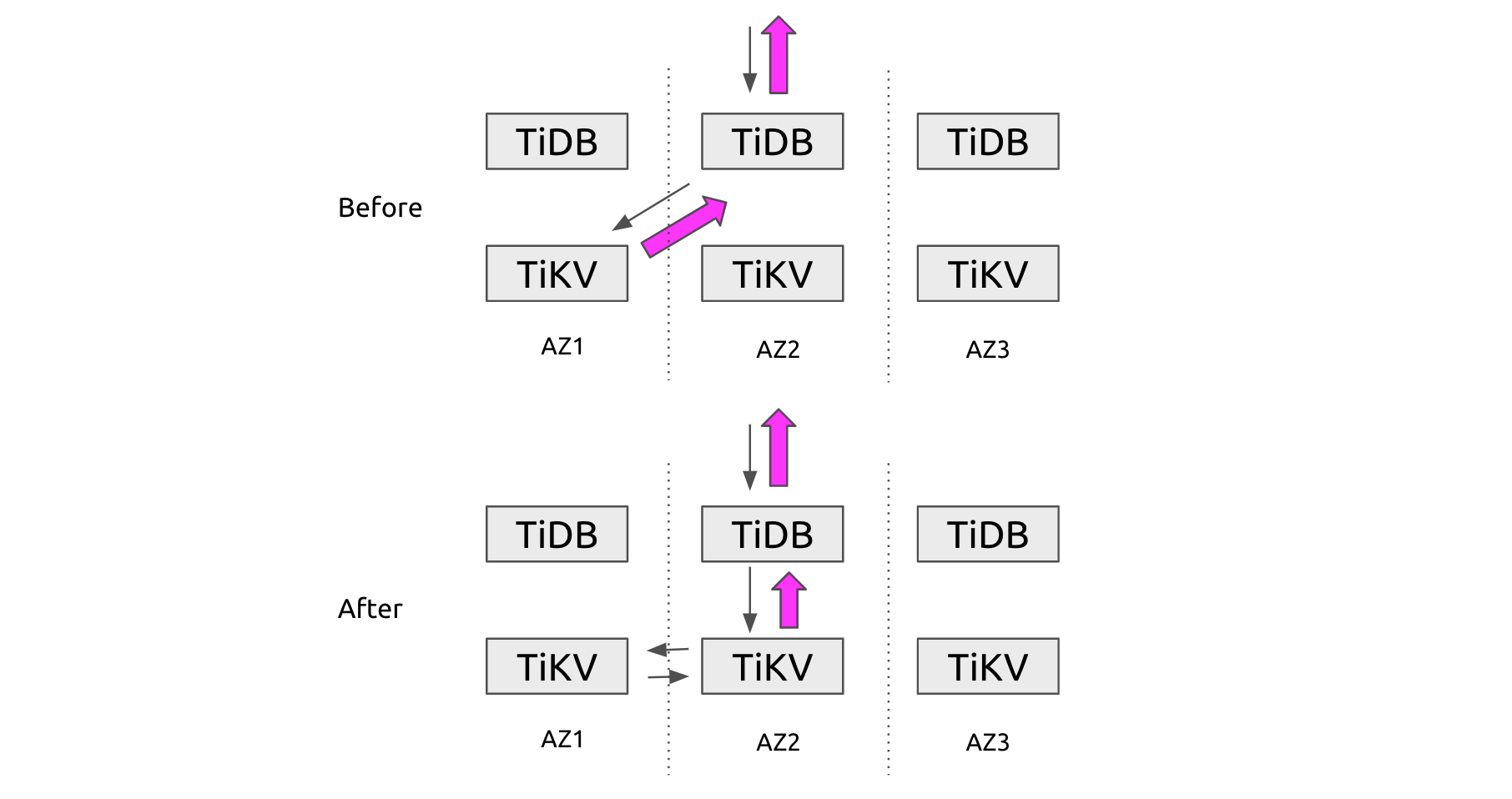 When TiDB generates the execution plan, it estimates the size of the result set based on statistics. If TiDB finds that the local TiKV instance is available, it will send the requests to the local TiKV.

Moreover, we considered the PD scheduling mechanism. PD should not schedule data when there's no bottleneck.

The difference with follower read

Our plan looks similar to the current follower read mechanism, which improves the throughput of the whole system by balancing the load among multiple followers, but it has some key differences:

We accomplished the cross-AZ traffic optimization within 24 hours. As shown in the following diagram, in our test topology, a single machine simulates an AZ. A TiDB instance and a TiKV instance are deployed on each machine (AZ). Cross-machine traffic is regarded as cross-AZ traffic.

We constructed a scan operation to test the traffic reduction. As you can see, the cross-AZ traffic dropped significantly.

We also tested it with sysbench's oltp-read-only mode, which showed an 89% reduction in cross-AZ traffic.

So far, we haven't done much with load monitoring and PD scheduling interference. Before going into production, we have more work to do, such as applying the latency-based strategy into the monitoring.

You can check the TiDB-related code here.

In Raft logs, the data in the same range is likely to have highly similar prefixes, such as a table-id or a timestamp oracle (TSO). Our plan is to encode these similar data in the Raft command:

In the sysbench batch insert testing, this optimization reduced data replication traffic across AZs by about 15%, with almost no overhead. Feel free to check out our code. 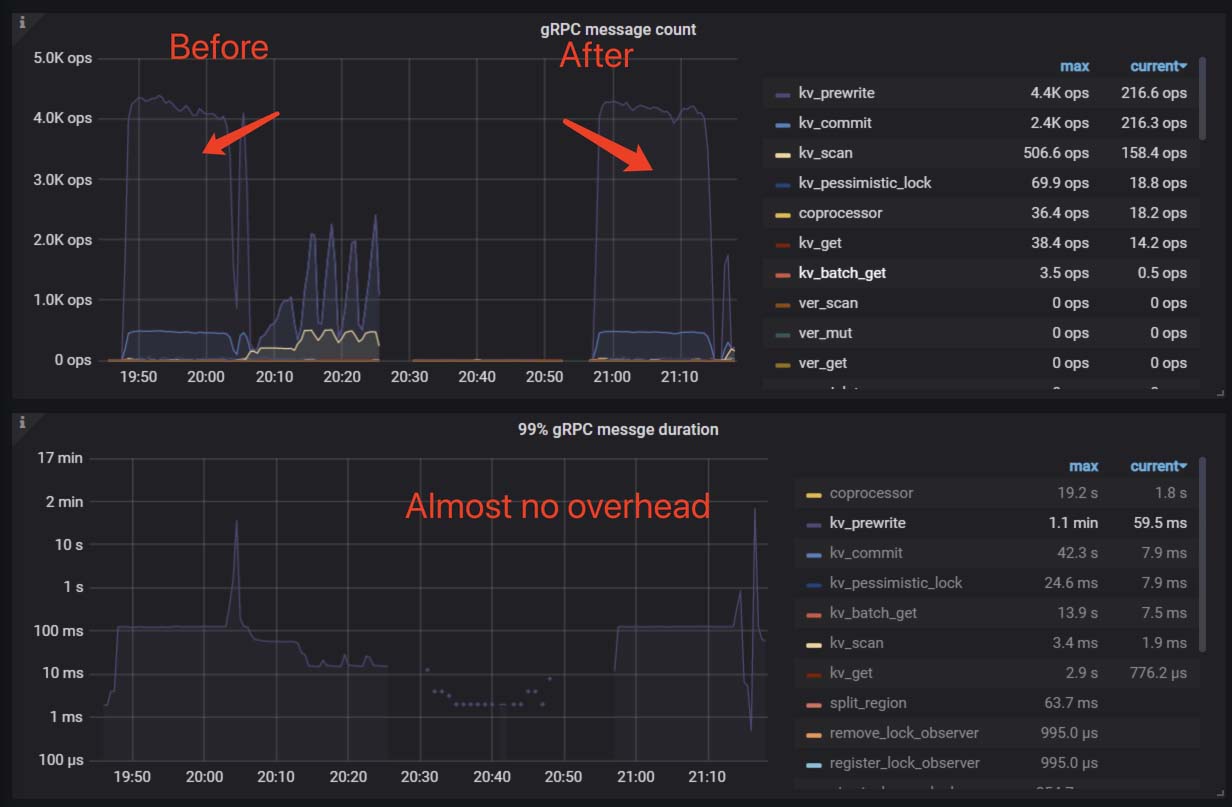 As shown below, if the Leader is in AZ1 but the write-in data often comes from AZ2, during the write operation, cross-AZ data transfer would occur three times. But if we transfer the Leader to AZ2 based on data affinity, data transfer is reduced to twice. 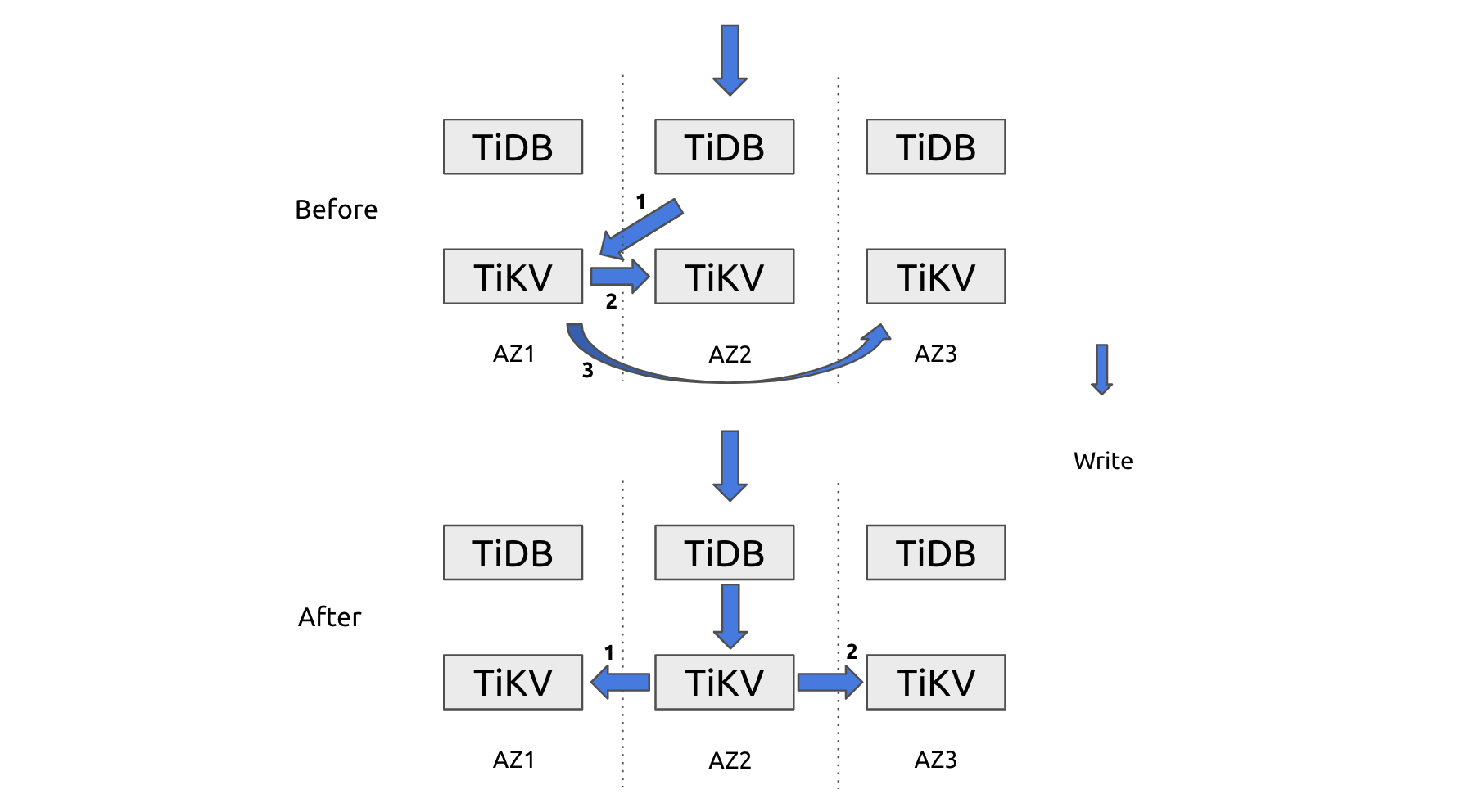 In our design, we add location labels to requests that are sent to TiKV. TiKV determines the affinity between the data table and the locations and reports that information to PD. According to statistics, PD transfers the related Leader to the AZ with the closest affinity.

A bonus of this implementation is that cross-AZ PointGet requests can also turn into in-AZ requests. 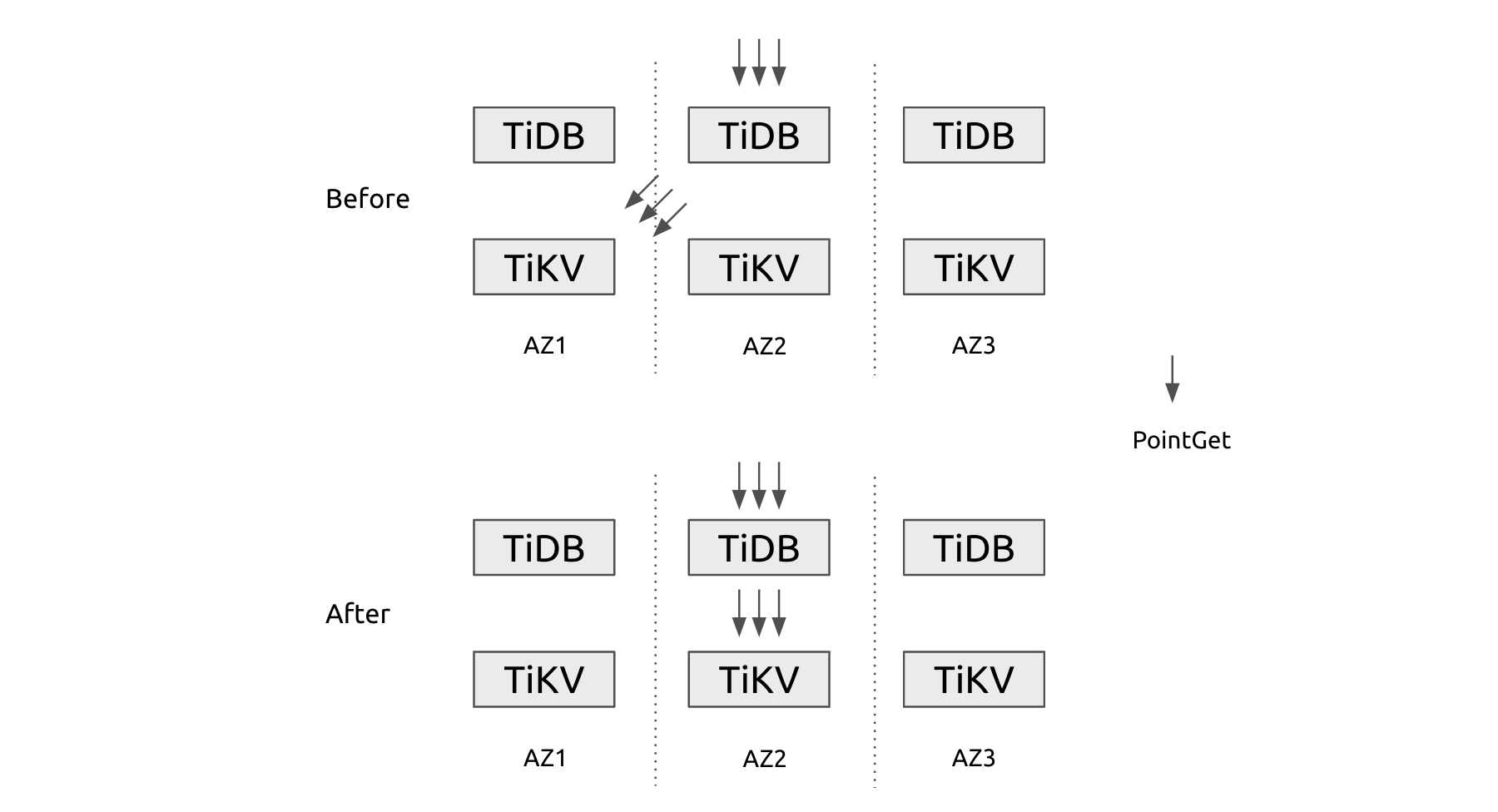 Our code is across all stacks: pd, tikv, kvproto, and tidb.

However, during our test, we found the following problems:

To sum up, our team has reduced cross-AZ read traffic by 89% and reduced the data replication Raftlog size by 15%, with hardly any overhead. For scenarios whose application data has typical characteristics, we expect to reduce cross-AZ data transfer by 33%.

This is our plan for future improvements:

Our team and expertise

I (Jinpeng Zhang) am a maintainer of TiKV, a graduated CNCF project. Before the Hackathon began, I recruited three team members from the TiDB community:

Due to COVID-19, we participated in this Hackathon online. Honestly speaking, the feelings and vibe at home were less exciting than the previous events. If you have an opportunity to take part in an on-site TiDB Hackathon, don't miss it!

Also, if you're interested in other TiDB events, join the TiDB community on Slack.