A common real-life use case is using TiDB DM to connect sharded MySQL or MariaDB to TiDB, treating TiDB almost as a secondary, then run analytical workloads on this TiDB cluster to fulfill real-time reporting needs. TiDB DM provides good support if you need to manage multiple data replication tasks at the same time or need to merge multiple MySQL/MariaDB instances into a single TiDB cluster.

A single TiDB DM cluster can perform multiple data replication tasks simultaneously. For each task, it can be split into multiple subtasks undertaken by many DM-worker nodes. Each DM-worker node is responsible for replicating the data of the corresponding upstream MySQL instance.

The following diagram shows the data migration process of a single subtask of data replication on each DM-worker node.

This process is similar to the primary-secondary replication in MySQL. But the main difference is in TiDB DM, the persisted relay log in the local storage can be used simultaneously by multiple syncer units of different subtasks, which avoids multiple tasks' repeatedly fetching the binlog from the upstream MySQL.

In order to accelerate data migration, TiDB DM applies the concurrency model in part of the process of both full backup migration and incremental data replication.

During the data exporting process with Mydumper, a single table can be split into multiple SQL files with --chunk-filesize and other parameters. Each of these SQL files corresponds to a static snapshot data of the upstream MySQL at a specific moment and no correlation exists between two SQL files. So when importing the data with loader, you can directly start multiple worker goroutines in a loader unit and each worker goroutine reads to-be-imported SQL files independently and concurrently and applies them into downside streaming. That's to say, loader loads data concurrently at the level of the SQL file. In task configuration,TiDB DM controls the number of worker goroutines with the pool-size parameter in the loader unit.

At the other end of the channel, the worker goroutine concurrently fetches the job from the corresponding channel and replicates the job to the downstream TiDB.

That's to say, Syncer imports data concurrently at the level of the binlog event. In task allocation, TiDB DM controls the number of worker goroutines with the worker-count parameter in the syncer unit.

However, some limitations exist in this process as follows:

When handling a large amount of data using MySQL, manual sharding is commonly used. After data has been replicated to TiDB, logically merging tables needs to be done.

This section introduces some features of TiDB DM for supporting replicating data from merged tables as follows.

Let's start with an example as shown in the diagram below:

In this example, there are two MySQL instances in the upstream; each instance has two schemas and each schema has two tables; there are eight tables in total. After we replicate the data to the downstream TiDB, the eight tables should be merged and replicated into one table.

To replicate these tables with different names from different schemas of different instances to the same table, data of different tables should be routed to the same downstream table according to the predefined rules. In TiDB DM, these rules are router-rules.

For instance, the router rule for the above example is:

Now let's take a look at the internals of TiDB DM:

With the table router feature, we can implement the basic function of replicating data from sharded tables. But in a database, auto-increment columns are widely used as the primary keys. If multiple primary keys of the sharded tables in the upstream generate their numbers automatically and independently, a conflict between primary keys might occur and result in the data mismatch after merging and synchronizing them into the downstream. Let's see another example as follows: 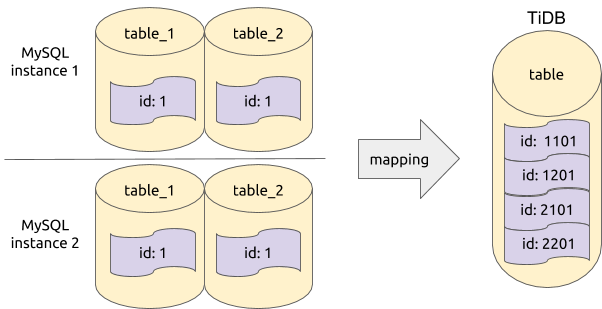 In this example, there are four tables that need to be merged and replicated into the table in the downstream TiDB. Each table has a record in the id column whose value is 1. Suppose that this id column is the primary key of the table. During the replication process, as some update operations use the id column as the condition to confirm records that need to be updated, it might make the latter replicated data overwrite the data that has been replicated and thus result in some data loss.

Therefore, during the data replication process, the column mapping function is developed to convert the data of related columns based on specified rules, so as to avoid the data conflict and loss.

For instance, the column mapping rule for MySQL instance 1 is:

Currently, partition id is the mainly supported conversion expression. It resolves the conflicts caused by merging and replicating data from different tables by adding the binary prefix to values of the bigint type. partition id includes three arguments:

Each argument has the following binary distribution in the conversion result (the number of bits that each part occupies by default):

Suppose that the original data is "123" before conversion and the arguments are set up as above, then the conversion result is:

For the detailed implementation of the column mapping, see column-mapping pkg source code in TiDB-Tools.

Now, suppose that the binlog data received from the two upstream sharded tables has the following time sequence in the synchronization process:

Suppose that we do no operation to the DDL of the sharded tables during data replication. When the DDL of Instance 1 is replicated to downstream, the table structure of downstream will be changed to schema V2. But DM-worker still receives the DML of schema V1 during the period between t2 and t3. When DM-worker tries to replicate the DML of schema V1 to downstream, the inconsistency between the DML and the table structure may lead to error and data cannot be replicated correctly. Let's look at the example above again to see how we handle the DDL replication when merging tables in TiDB DM.

As for the sharding DDL replication within one TiDB DM, we can generalize some characteristics from the above procedures:

From the above characteristics, we can see some functional restrictions as follows:

Because data comes from the same MySQL instance, all the data is obtained from the same binlog flow. In this case, the time sequence is as follows:

If we do no special operation to DDL during the data replication, when the DDL of table_1 is replicated to downstream and changes the table structure of downstream, the DML of table_2 schema V1 will not be replicated as normal. Therefore, within a single DM-worker, we have created logical sharding groups which are similar to those within a DM-master. But the group members are the different sharded tables in the same upstream MySQL instance.

But when DM-worker coordinates the replication among sharding groups within a DM-worker, the coordination is not entirely the same as that performed by DM-master. The reasons are:

In TiDB DM, a simplified replication process of sharding DDL within the TiDB DM worker is as described below:

As you can see, TiDB DM mostly uses a two-level sharding group for coordination and control when handling replication of sharding DDL. Here is the simplified process:

During data replication, sometimes it is not necessary to replicate all upstream data to downstream. This is a scenario where we could use certain rules to filter out the unwanted part of the data. In TiDB DM, we support two replication filters that apply to different levels.

TiDB DM allows you to configure inclusive/exclusive replication of a specific part of tables or schemas for processing units including Dumper, Loader, and Syncer.

For example, if we only want to export data from tables t1 and t2 in the test schema, we can configure the following rule for the dumper unit:

For more information on support for the block and allow list, see Mydumper parameters and its source code.

The corresponding rule of table and schema block and allow list rule for Loader and Syncer is block-allow-list. Assuming you only want to replicate data from tables t1 and t2 from the test schema, you can configure the rule as below:

The corresponding rule of table and the block and allow list rule for Loader and Syncer is block-allow-list. Assuming you only want to replicate data from tables t1 and t2 from the test schema, you can configure the rule as below:

Only part of the configuration options are used in the sample above. For complete configuration options and their definitions, see the user documentation for this feature. The rule used in TiDB DM is similar to the primary-secondary filter rule in MySQL, so you can also refer to Evaluation of Database-Level Replication and Binary Logging Options and Evaluation of Table-Level Replication Options.

During an incremental data replication, sometimes you may want to filter out specific types of binlog event. There are two typical scenarios:

TiDB DM allows you to filter by binlog event types. For the TRUNCATE TABLE and DROP TABLE filter scenarios mentioned above, configure the rule as below:

The matching pattern of the rule is similar to table routing and column mapping. For detailed configurations, see the user documentation for the feature.

To implement this, after getting the schema name, table name, and binlog event type, the TiDB DM processing unit will identify the configured rule, and decide whether to filter based on the action configuration. For detailed implementation of the filter function, see binlog-filter pkg under TiDB-tools.

As an integrated data transfer and replication management platform, TiDB DM plays an important role in the TiDB ecosystem. It works well in providing the full data migration and the incremental data replication services, and gains more and more popularity among customers. In the future, it will still be a key focus of our development team and we are expecting more contributors to join us to improve its reliability, stability, and usability together.