How to Deploy TiDB on Google Cloud Platform—Part 2

Welcome to the second of a two-part blog series on getting a simple TiDB cluster up and running on Google Cloud Platform. The goal is to let you quickly set up TiDB and become familiar with its benefits. In Part 1, we created a GCP instance. Here in Part 2, we will install, configure, and run TiDB on that instance.

By the end of this article, your architecture may look similar to the following: 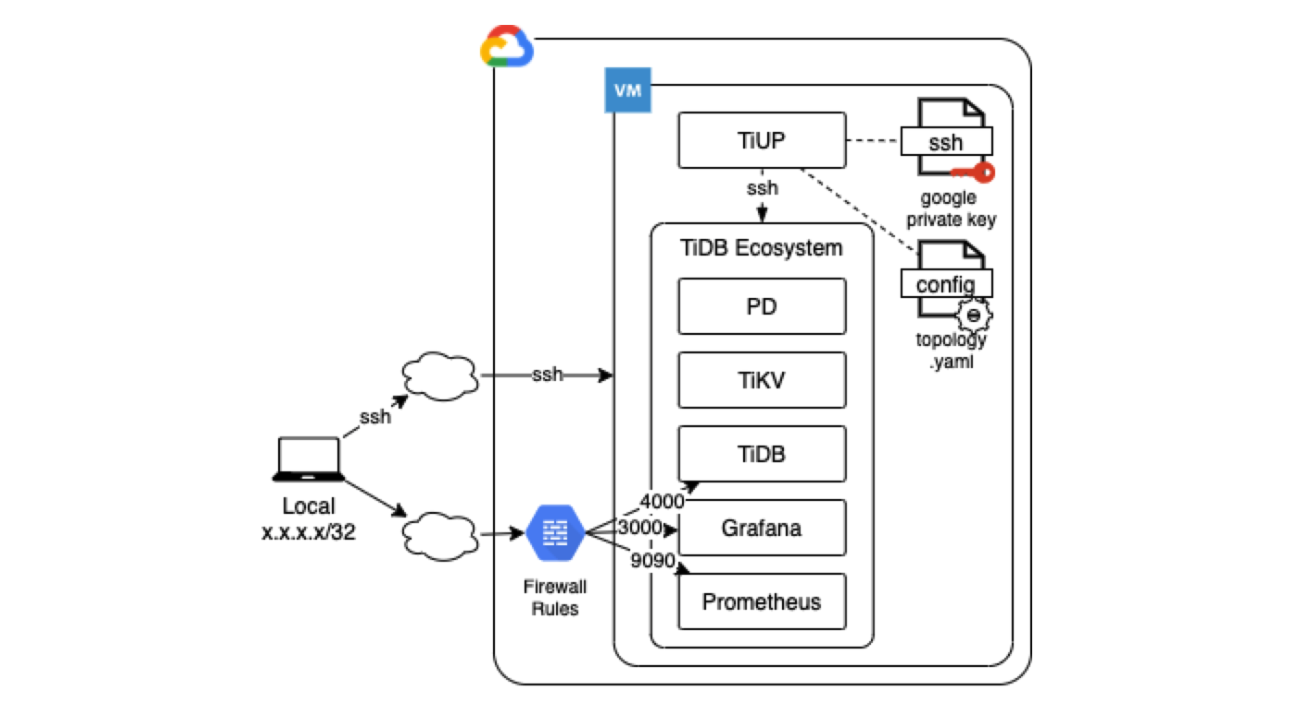 In Part 1, we focused on the Prerequisite Operations of setting up and configuring GCP in order to run TiDB. (See the image below.) Now, we will actually set up and run TiDB.

In Part 1 we had set up the following:

If you have not yet set these up, or are having any issues, please refer to Part 1. Also, your local computer will need to be a MacOS or Linux operating system. First, let's check that things are set up correctly.

If you haven't securely logged into your GCP instance, do so now:

Notice that the server we SSH into has a prompt that references the tidb-vm instance. 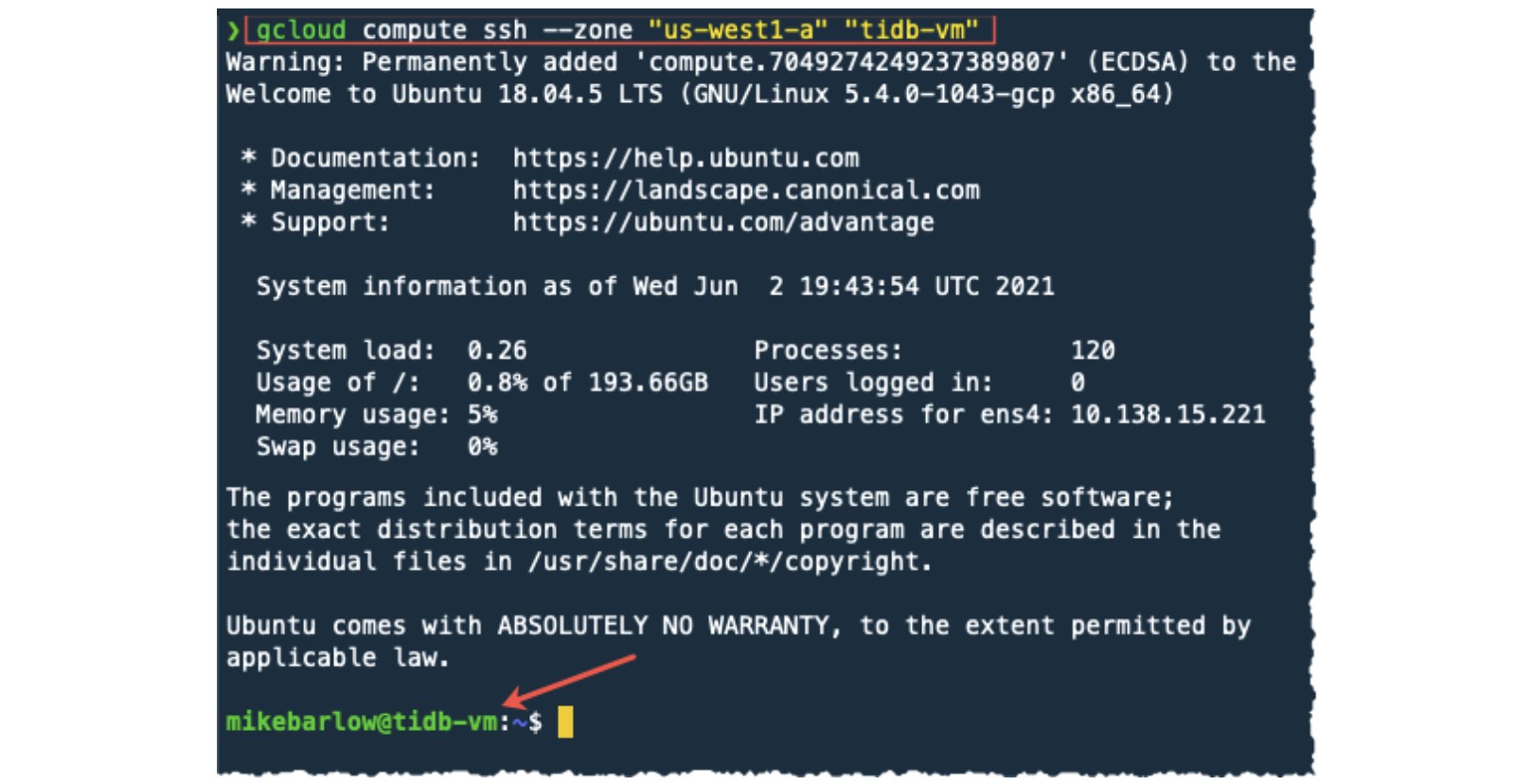 Let's check the account that gcloud is associated with:

Once you see your registered email address, that confirms that you are running under the correct user account.

Let's check which SSH keys we have available:

The primary file we are interested in is the google_compute_engine, which is the private key that TiUP will use for SSH.

We should have a firewall rule that grants our local computer access to TiDB components (TiDB Dashboard, Grafana, Prometheus, and the SQL interface). Let's check the rules with the following command:

In Part 1, we had created the firewall rule access-from-home. GCP automatically created the other firewall rules. This should provide us a comfort level that the GCP instance is set up correctly to run TiDB.

TiUP is a package manager that makes it easier to manage different cluster components in the TiDB ecosystem.

Notice that the .bashrc file was updated to include the path to the TiUP working directory that was created in our home directory under .tiup/.

Since the path has been updated in the .bashrc, we need to reload it by running the following command, which will not display any output:

As a sanity check, let's make sure that TiUP is installed:

Notice the output for the tiup cluster list command. Here we can see that TiUP has been installed, and there are currently no TiDB clusters running. Your version of TiUP will probably be different.

We use TiUP to deploy and scale the TiDB ecosystem. A topology file is a configuration file that identifies the components that will be deployed and on which server they will be deployed.

Let's create the topology.yaml file. This topology file is fairly simple and tells TiUP to do the following:

Copy and paste the following into the topology.yaml file:

Note that all the IP addresses are 127.0.0.1 (localhost). We are installing one instance of each component on the same computer (localhost). We do this on purpose to create an environment to test the different components.

To deploy a TiDB cluster, we use the TiUP command tiup cluster. Below is a check argument that does dry run to validate the topology.yaml file and determine whether ssh access is sufficient.

In Part 1, we created the Google private key for SSH. We will use this private key in the command below with the parameter --identity_file.

We include a reference the topology.yaml file:

Since we are doing a quick test, don't worry about the output of Pass, Fail, and Warn status.

You want to see output similar to the following: 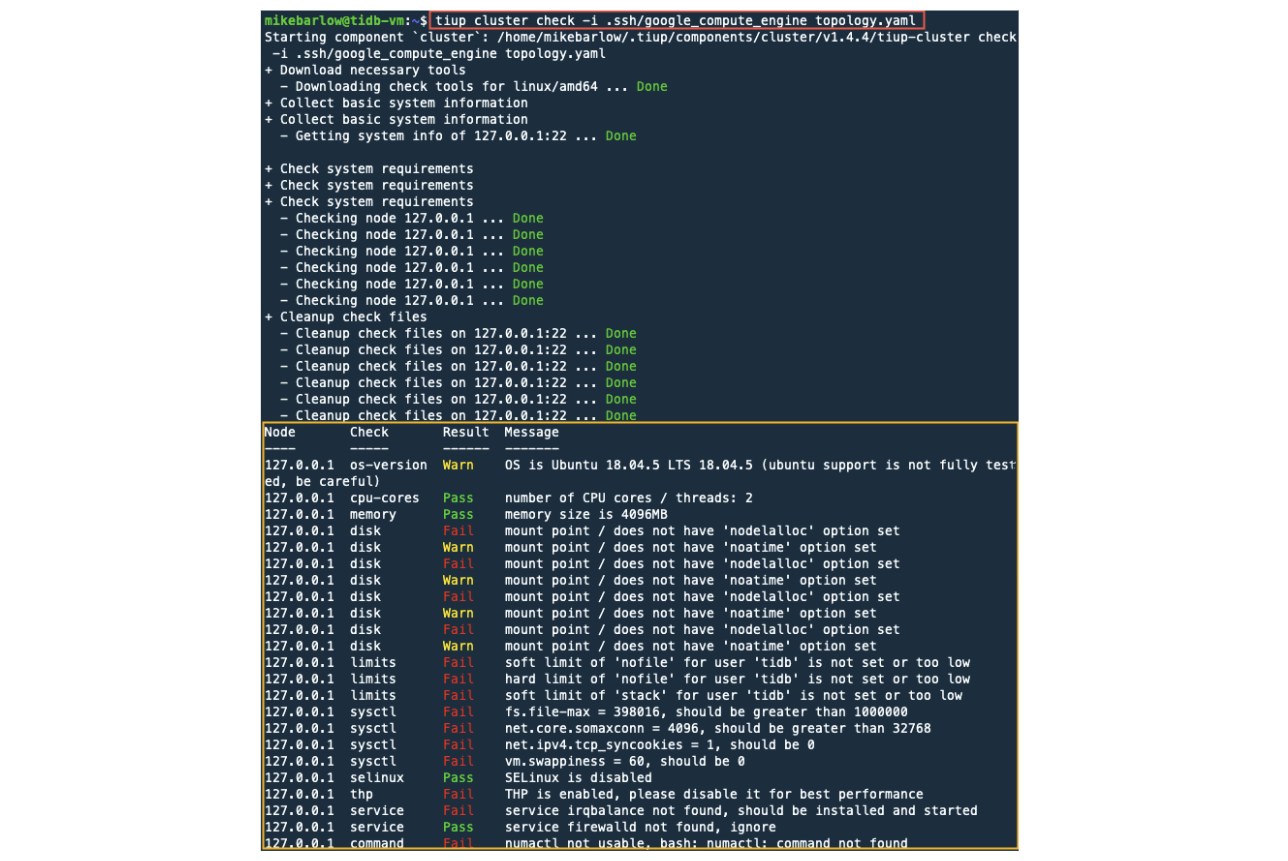 If things didn't work correctly, you may see certain error messages, as in the results below. Notice that on the command line I misspelled the private key name. TiUP couldn't find it and raised an error. If you do see this error, please reference creating SSH Keys in Part 1.

In the previous section we did a dry run. Now, let's use TiUP to deploy TiDB.

For a deployment, we need to add a few additional parameters. The main parameters are identified below:

Here's a breakdown of the command: 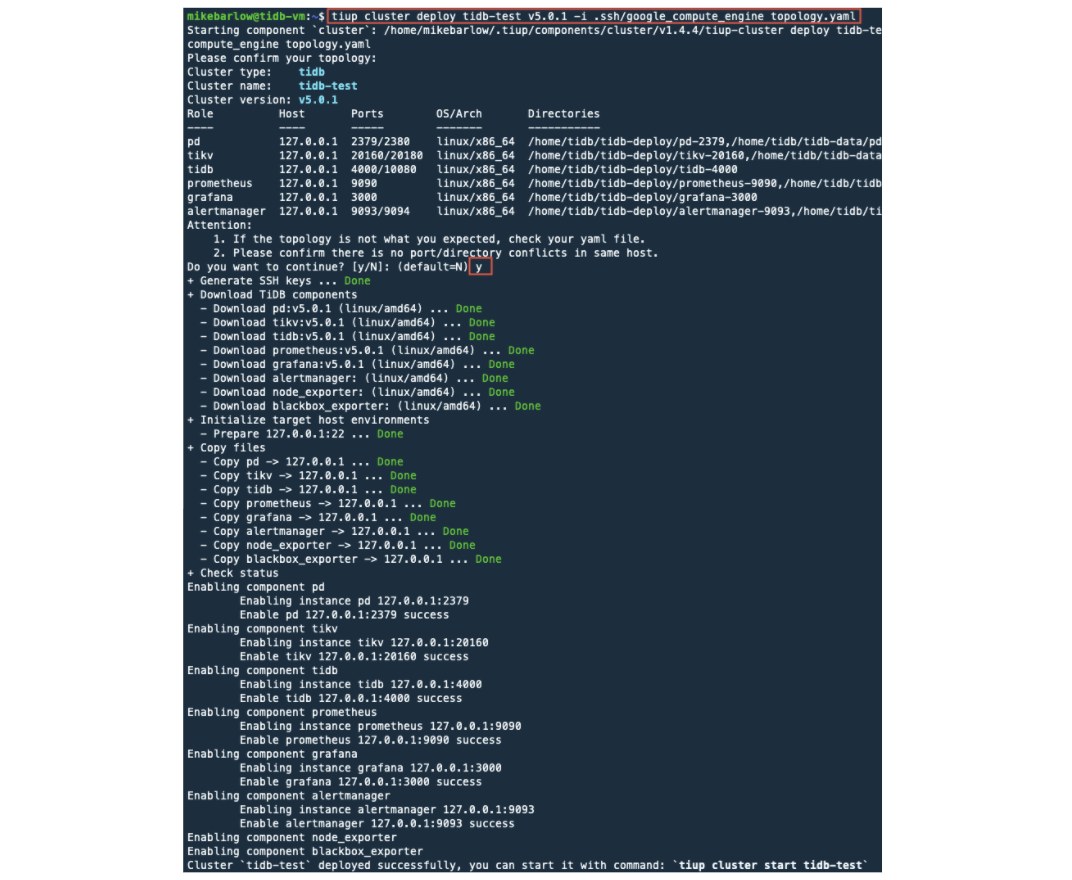 We successfully deployed a TiDB cluster, but have not yet started the cluster.

Let's do a sanity check and confirm which cluster is being managed by TiUP:

The output should include the cluster name, path, and private key.

We should see only the one cluster that we deployed.

Let's see the details of the tidb-test cluster:

We haven't started TiDB and its components, so it is offline with the statuses of inactive, down, and N/A. Before we start TiDB, I like to see which service ports are open on the GCP instance. These ports are assigned to processes that run on the GCP instance, and are different from the GCP firewall rules that we had created. After we start TiDB, we will run this command again and see which ports are associated with the different TiDB processes.

By default, Google GCP instances have assigned these ports to these processes: 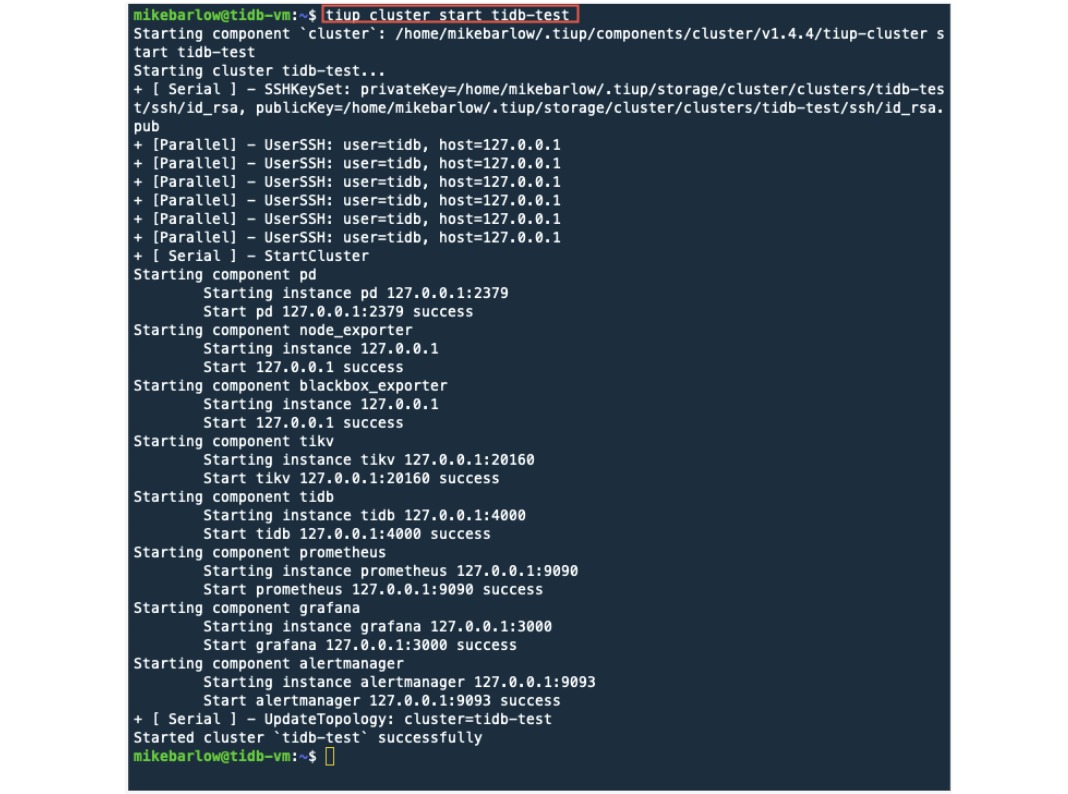 There's a lot going on here, but the key is that there are no errors being shown.

As a sanity check, let's see the details of the tidb-test cluster using the display parameter:

As we can see, all the components are up and running.

Let's see which ports and services are available:

There are many processes running that have TCP ports associated with them. In the image above, I've highlighted the ports that we opened with the GCP firewall rule.

In this section we will access the following components from a browser on our local computer:

Also, we will use a local SQL client to access TiDB and run a few SQL commands. To access the TiDB components that are running on our GCP instance from our local computer, we will need the external IP address of our GCP instance:

Here we can see that the GCP instance's external IP address is 34.83.139.90. (Your IP address will be different.) We will use this IP address from our browser on our local computer.

Here's the TiDB Dashboard. To learn more about the dashboard, see our online documentation. 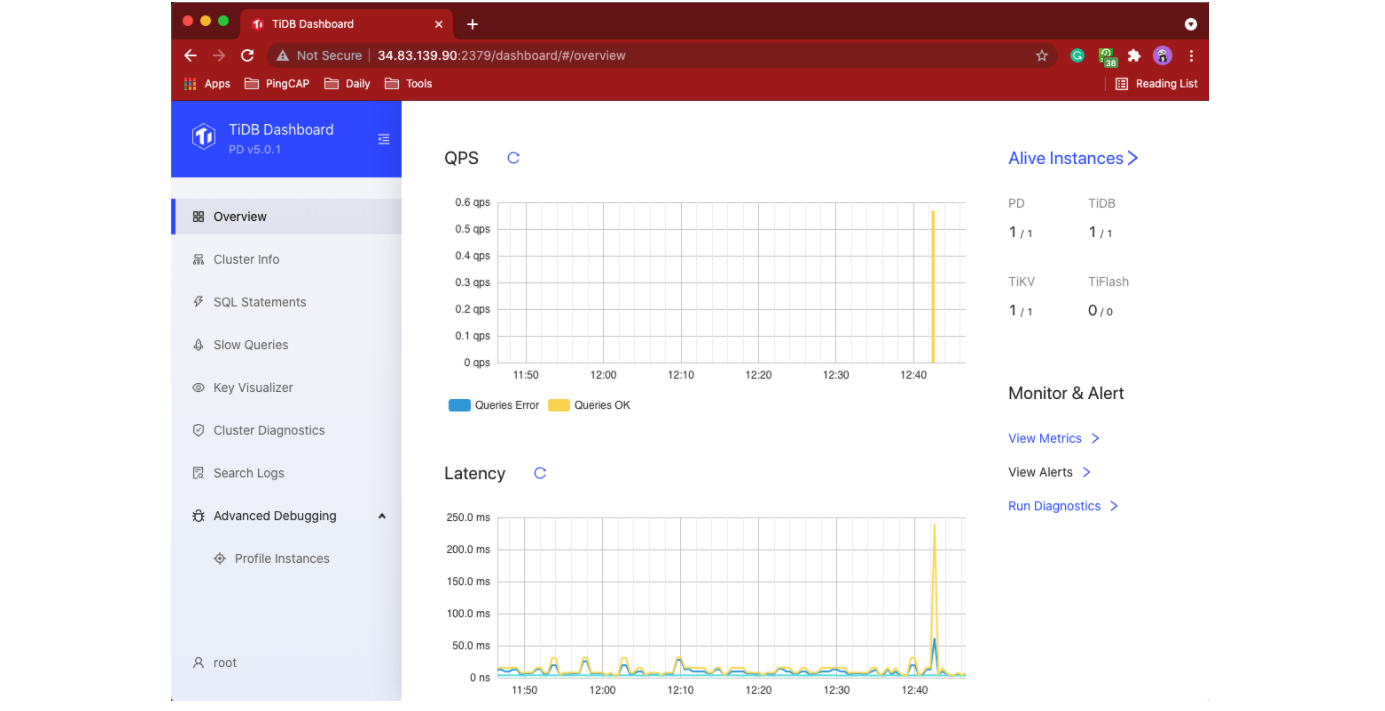 Login to Grafana using admin for both the username and password.

You may be prompted to change your password. I selected "Skip" since this is a temporary system that only I have access to with my local computer.

The initial Grafana Dashboard should look something like this: 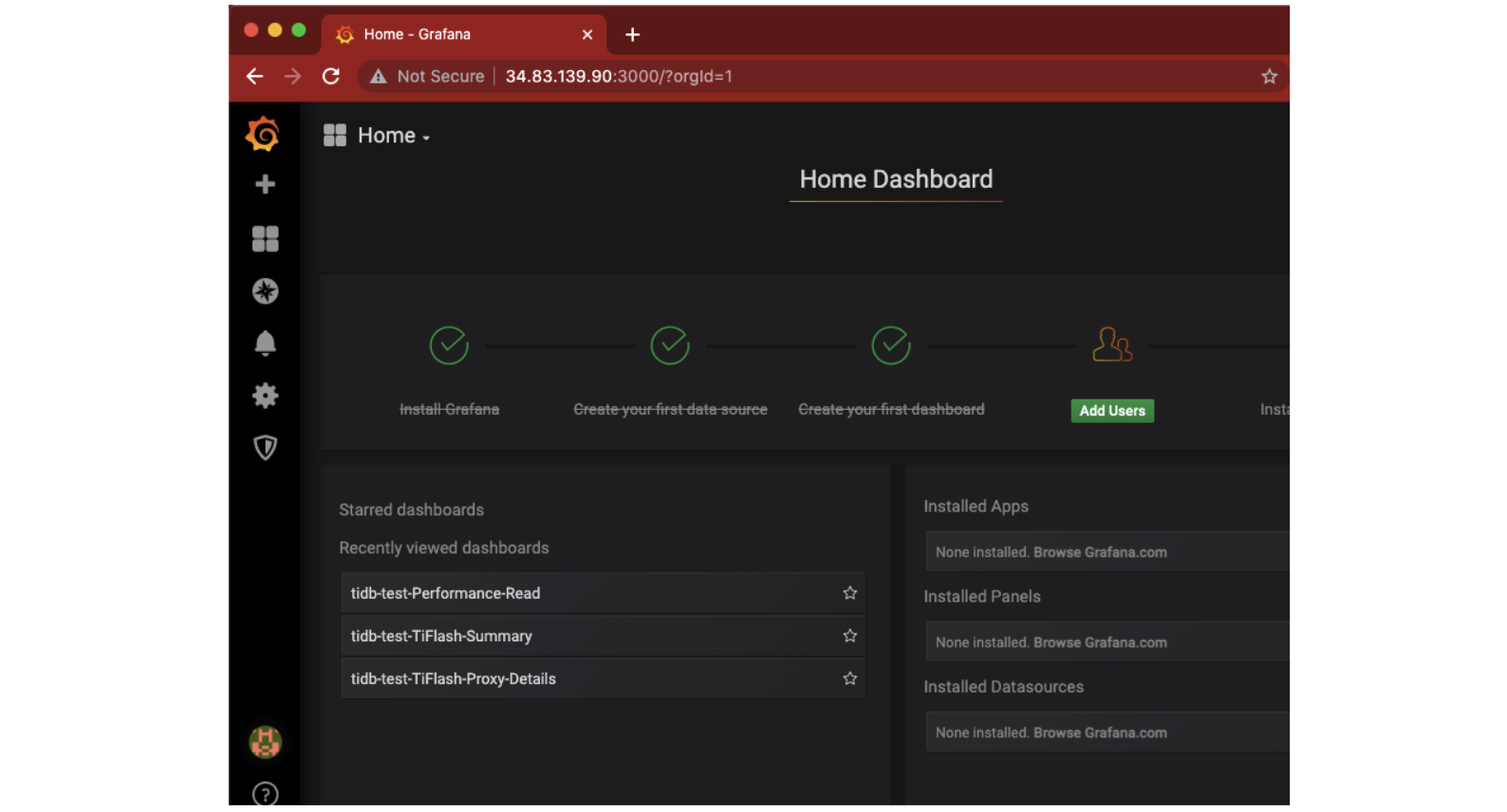 You should not need a user ID or password.

In Part 1, we installed a MySQL Client on the GCP Instance. Now, let's use the MySQL Client to connect to TiDB.

From our GCP instance, run the following command. This command will start a MySQL Client and connect to 127.0.0.1 (localhost) on port 4000 with the username root:

Now we should have a mysql> prompt. Let's run a few commands:

If you already have a MySQL Client or other tool, you can use it to access TiDB over port 4000. Just remember to use the GCP instance public IP address.

Congratulations! You have gotten a simple TiDB cluster up and running. Now, you can access monitoring tools that include TiDB Dashboard, Grafana, and Prometheus.

You now have a foundation to learn more about TiDB and try things out.

If you are done with the GCP instance, you can tear it down by following the steps below.

The easiest way to tear down this environment is by deleting the GCP instance.

From our local computer, let's get a list of GCP instances. We will then destroy (delete) the tidb-vm instance and then confirm the instance has been deleted.

From your local computer, run the following gcloud commands.

The delete command may take a few minutes to complete.

Your GCP environment should be cleaned up and back to its original state.