Building a Large-scale Distributed Storage System Based on Raft

Since April 2015, we PingCAP have been building TiKV, a large-scale open source distributed database based on Raft. It's the core storage component of TiDB, an open source distributed NewSQL database that supports Hybrid Transactional and Analytical Processing (HTAP) workloads. Earlier in 2019, we conducted an official Jepsen test on TiDB, and the Jepsen test report was published in June 2019. In July the same year, we announced that TiDB 3.0 reached general availability, delivering stability at scale and performance boost.

In this article, I'd like to share some of our firsthand experience in designing a large-scale distributed storage system based on the Raft consensus algorithm.

The first thing I want to talk about is scaling. The core of a distributed storage system is nothing more than two points: one is the sharding strategy, and the other is metadata storage. Keeping applications transparent and consistent in the sharding process is crucial to a storage system with elastic scalability.

If a storage system only has a static data sharding strategy, it is hard to elastically scale with application transparency. Such systems include MySQL static routing middleware like Cobar, Redis middleware like Twemproxy, and so on. All these systems are difficult to scale seamlessly.

Before moving on to elastic scalability, I'd like to talk about several sharding strategies.

Sharding is a database partitioning strategy that splits your datasets into smaller parts and stores them in different physical nodes. The unit for data movement and balance is a sharding unit. Each physical node in the cluster stores several sharding units. 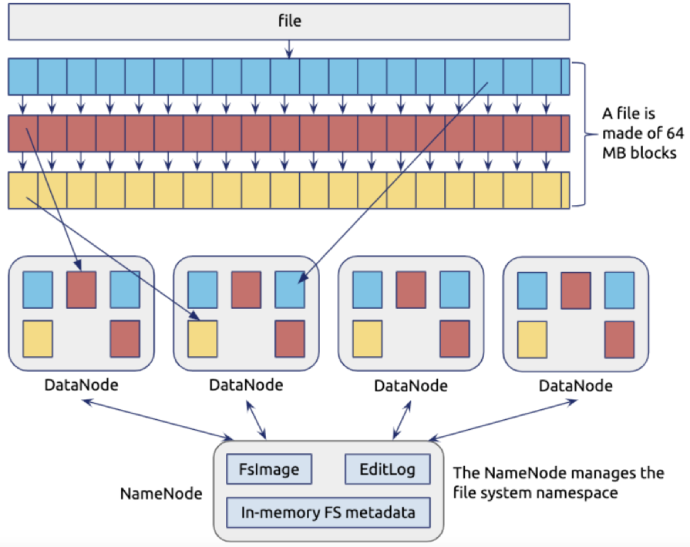 Range-based sharding assumes that all keys in the database system can be put in order, and it takes a continuous section of keys as a sharding unit.

It's very common to sort keys in order. HBase keys are sorted in byte order, while MySQL keys are sorted in auto-increment ID order. For some storage engines, the order is natural. In the case of both log-structured merge-tree (LSM-Tree) and B-Tree, keys are naturally in order.

In Figure 2 (source: MongoDB uses range-based sharding to partition data), the key space is divided into (minKey, maxKey). Each sharding unit (chunk) is a section of continuous keys. The advantage of range-based sharding is that the adjacent data has a high probability of being together (such as the data with a common prefix), which can well support operations like range scan. For example, HBase Region is a typical range-based sharding strategy.

However, range-based sharding is not friendly to sequential writes with heavy workloads. For example, in the time series type of write load, the write hotspot is always in the last Region. This occurs because the log key is generally related to the timestamp, and the time is monotonically increasing. But relational databases often need to execute table scan (or index scan), and the common choice is range-based sharding.

Contrary to range-based sharding, where all keys can be put in order, hash-based sharding has the advantage that keys are distributed almost randomly, so the distribution is even. As a result, it is more friendly to systems with heavy write workloads and read workloads that are almost all random. This is because the write pressure can be evenly distributed in the cluster. But apparently, operations like range scan are almost impossible.

When it comes to elastic scalability, it's easy to implement for a system using range-based sharding: simply split the Region. Assuming that you have a Range Region [1, 100), you only need to choose a split point, such as 50. Then this Region is split into [1, 50) and [50, 100). After that, move the two Regions into two different machines, and the load is balanced.

In contrast, implementing elastic scalability for a system using hash-based sharding is quite costly. The reason is obvious. Assume that the current system has three nodes, and you add a new physical node. In the hash model, "n" changes from 3 to 4, which can cause a large system jitter. Although you can use a consistent hashing algorithm like Ketama to reduce the system jitter as much as possible, it's hard to totally avoid it. This is because after a hash function is applied, data is randomly distributed, and adjusting the hash algorithm will certainly change the distribution rule for most data.

However, this replication solution matters a lot for a large-scale storage system. Generally, the number of shards in a system that supports elastic scalability changes, and so does the distribution of these shards. The system automatically balances the load, scaling out or in. If there is a large amount of data and a large number of shards, it's almost impossible to manually maintain the primary-secondary relationship, recover from failures, and so on. So it's very important to choose a highly-automated, high-availability solution.

In TiKV, each range shard is called a Region. Because we need to support scanning and the stored data generally has a relational table schema, we want the data of the same table to be as close as possible. Each Region in TiKV uses the Raft algorithm to ensure data security and high availability on multiple physical nodes.

If you use multiple Raft groups, which can be combined with the sharding strategy mentioned above, it seems that the implementation of horizontal scalability is very simple. Taking the replicas of each shard as a Raft group is the basis for TiKV to store massive data. However, it is much more complex to manage multiple, dynamically-split Raft groups than a single Raft group. As far as I know, TiKV is currently one of only a few open source projects that implement multiple Raft groups.

TiKV divides data into Regions according to the key range. When a Region becomes too large (the current limit is 96 MB), it splits into two new ones. This splitting happens on all physical nodes where the Region is located. The newly-generated replicas of the Region constitute a new Raft group.

Question #1: How do we ensure the secure execution of the split operation on each Region replica?

The solution is relatively easy. You can use the following approach, which is exactly what the Raft algorithm does:

The split process is coupled with network isolation, which can lead to very complicated cases. For example, assume that there are two nodes named A and B, and the Region leader is on node A:

Question #2: How do we guarantee application transparency?

Raft does a better job of transparency than Paxos. Specifically, Raft provides a clear configuration change process to make sure nodes can be securely and dynamically added or removed in a Raft group. With this algorithm, the rebalance process can be summarized as follows:

These steps are the standard Raft configuration change process. In TiKV, the implementation is a little bit different:

The process in TiKV can guarantee correctness and is also relatively simple to implement.

In addition, to implement transparency at the application layer, it also requires collaboration with the client and the metadata management module. After all, when a Region leader is transferred away, the client's read and write requests to this Region are sent to the new leader node.

Note: In this context, "the client" refers to the TiKV software development kit (SDK) client.

When a client reads or writes data, it uses the following process:

Scheduling in a distributed storage system

In this section, I'll discuss how scheduling is implemented in a large-scale distributed storage system.

In addition, to rebalance the data as described above, we need a scheduler with a global perspective. To dynamically adjust the distribution of Regions in each node, the scheduler needs to know which node has insufficient capacity, which node is more stressed, and which node has more Region leaders on it. This is because all nodes are almost stateless, and they cannot migrate the data autonomously. Instead, they must rely on the scheduler to initiate data migration (raft conf change).

You might have noticed that you can integrate the scheduler and the routing table into one module. Google's Spanner database uses this single-module approach and calls it the placement driver. We also use this name in TiKV, and call it PD for short. PD is mainly responsible for the two jobs mentioned above: the routing table and the scheduler.

Google's Spanner paper does not describe the placement driver design in detail. However, it's certain that one core idea in designing a large-scale distributed storage system is to assume that any module can crash. It's very dangerous if the states of modules rely on each other. This is because once an instance crashes, the standby instance must start immediately, but the state of this newly-started instance might not be consistent with the instance that has crashed. At this time, we must be careful enough to avoid causing possible issues.

Take a simple case as an example. The PD routing table is stored in etcd. However, the node itself determines the split of a Region. This way, the node can quickly know whether the size of one of its Regions exceeds the threshold. When this split event is actively pushed from the node to PD, if PD receives this event but crashes before persisting the state to etcd, the newly-started PD doesn't know about the split. At this point, the information in the routing table might be wrong.

Periodically, each node sends information about the Regions on it to PD using heartbeats. Then, PD takes the information it receives and creates a global routing table. In this way, even if PD crashes, after the new PD starts, it only needs to wait for a few heartbeats and then it can get the global routing information again. In addition, PD can use etcd as a cache to accelerate this process. That is, after the new PD starts, it pulls the routing information from etcd, waits for a few heartbeats, and then provides services.

However, you might have noticed that there is still a problem. If the cluster has partitions in a certain section, the information about some nodes might be wrong.

For example, some Regions re-initiate elections and splits after they are split, but another isolated batch of nodes still sends the obsolete information to PD through heartbeats. So for one Region, either of two nodes might say that it's the leader, and the Region doesn't know whom to trust.

The previous section mentions that a split process with network isolation might result in complicated cases. The epoch mechanism we discuss here is the solution to the example case described above.

It's a highly complex project to build a robust distributed system. I've shared some of the key design ideas of building a large-scale distributed storage system based on the Raft consensus algorithm. If you're interested in how we implement TiKV, you're welcome to dive deep by reading our TiKV source code and TiKV documentation.

This article was first published on the CNCF website.