Inspired by the paper MonetDB/X100: Hyper-Pipelining Query Execution, we began to employ vectorized execution in TiDB to improve query performance. (Besides this article, we also suggest you take Andy Pavlo's course on Query Execution, which details principles about execution models and expression evaluation.)

At the end of 2017, we performed three optimizations on the TiDB SQL execution engine:

In this post, I'll deep dive into why we need vectorized execution, how we implement it, how we managed to vectorize more than 360 functions along with community contributors, and our thoughts about the future.

Why do we need vectorized execution?

Previously, TiDB implemented the Volcano-style execution engine. This iterator model uses a standard data access interface. It has open()-next()-close() between algebra operators and processes data row by row. The Volcano model is simple and extensible.

But when evaluating large queries, the Volcano model causes high interpretation overhead. In addition, it cannot make the best of modern CPU hardware characteristics, such as CPU cache, branch prediction, and instruction pipelining.

In this section, I'll use the TiDB expression colA * 0.8 + colB to show the overhead gap between row-based execution and vectorized execution.

According to arithmetic operators and their operator precedence, TiDB parses this expression into an expression evaluation tree.

The computing logic of each node can be abstracted as the following evaluation interface:

Taking *, 0.8, and col nodes as examples, all three nodes implement the interface above. Their pseudocode is as follows:

The interpretation overhead of row-based execution

Similar to the Volcano model, the expression implementation discussed above is iterating over rows.

How much is the interpretation overhead for row-by-row iteration? Let's take a look at the implementation of a function in TiDB.

The builtinArithmeticMultiplyRealSig function multiplies two floating-point numbers. The following code block describes the implementation of this function. The numbers on the right indicate the number of assembly instructions for the corresponding row, which are obtained after code assembling. Note that this block includes only rows that are iterated in normal conditions, and ignores logic for error processing.

The following table lists each builtinArithmeticMultiplyRealSig function task and the number of assembly instructions to perform it. (If a task requires multiple lines of code, the number of instructions per line is shown in parentheses.)

As the table reveals, every time this function performs a multiplication, only 8 out of 82 (9+30+28+8+7=82) instructions are doing the “real” multiplication. That's only about 10% of the total instructions. The other 90% are considered interpretation overhead. Once we vectorized this function, its performance was improved by nearly nine times. See PR #12543.

Like vectorized optimization for SQL operators, we can process and return one batch of data at a time. This decreases the interpretation overhead in the expression evaluation process.

Assume that there are 1024 rows in a batch of data. After optimization, every time a function is called, 1024 rows of data are processed and then returned. The interpretation overhead for function calling becomes 1/1024 of the original one.

Therefore, we can add the following interface to evaluate an expression in a batch way:

The real source code is not exactly the same as the model shown above. It looks like this:

To explain the reason, let me briefly introduce TiDB's Chunk structure, which is the data representation in memory during the query execution phase.

At the end of 2017, we were working on vector optimization and introduced the concept of a Chunk. A Chunk is composed of multiple columns.

There are two types of columns:

No matter whether the data length is fixed or variable, data in columns are contiguously stored in memory in the Column.data field (which is an array). If the data length varies, Column.offset records the data offset. If the data is with fixed length, no offset is recorded.

Now that you understand the basics of TiDB Chunks, let's come back to the interface design.

Based on the Chunk implementation and the Golang characteristics, we optimized the expression evaluation interface in these aspects:

Based on these optimizations, our expression vectorization evaluation interface has become what it is today.

How do we implement vectorized execution?

This section covers how to implement vectorized execution for functions.

Take multiplyRealNode as an example:

This implementation method diminishes the interpretation overhead by batch processing and is more beneficial to modern CPUs:

In this section, I'll use the TiDB source code for benchmark testing and compare the performance before and after code vectorization.

We use the same data (1024 rows formed by two columns of floating-point numbers) to respectively compute col0 * 0.8 + col1 in two ways: row-based execution and vectorized execution. The results are as follows:

The results above show vectorized execution is four times faster than row-based execution.

The following figure compares the performance of various less than (LT) functions before and after vectorization. The horizontal axis indicates the LT functions for testing, and the vertical axis represents the execution duration (in nanoseconds) to complete an operation.

The following figure compares the performance of arithmetic functions before and after vectorization:

After we tested more than 300 vectorized functions, we found that over 50% of these functions more than doubled their performance, and 18.7% of functions achieved 10x performance. 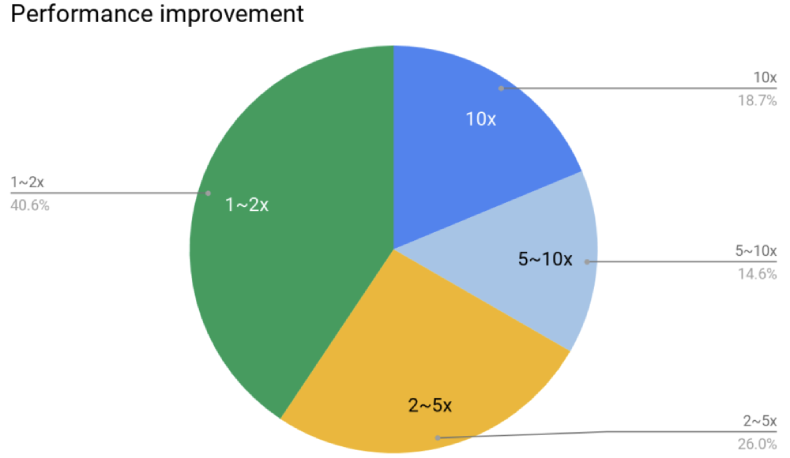 How do we vectorize 360+ built-in functions?

To develop our code more efficiently, we're vectorizing as many built-in functions as we can by using the Golang text/template. This template generates the source code of vectorized functions. To get more people working on the project, we founded the Vectorized Expression Working Group in the developer community. In this approach, community contributors take the vast majority of work during the vectorizing progress.

With our joint efforts, we have refactored more than two-thirds of our built-in functions, and most of them have gained an impressive performance boost. Some have even achieved performance gains of one or two orders of magnitude.

When we vectorized built-in functions, we found that many functions had similarities. For example, most of the LT (<), GT (>), and LE (<=) functions have similar logic. They only differ in the operators they use. Therefore, it's possible to use a template to generate the code of these functions.

Currently, Golang doesn't support generic types and macro definition, so we use the text/template package to generate code.

Based on the syntax of the Golang template, we abstract the functions to be generated into a template. For example, here is the template for comparison functions like LT and GT:

For different types of data and operators, the template generates the corresponding code. For the complete code, see PR #12875.

Vectorization with the community's help

Since then, we've been asking contributors to fill or refactor the functions they're interested in.

We also wrote a testing framework. After a contributor vectorizes the function, they can use the framework to test the correctness and performance of a built-in function by writing just a few simple lines of configuration.

As shown in the code below, a contributor only needs to add related parameters to vecBuiltinArithemeticCases.

Next, they can run following two functions that we've written. Then, they can perform correctness and performance tests.

With the community's help, we've vectorized more than 360 functions in just two months. During this period, our community contributors have filed 256 PRs.

In addition, when we vectorized expressions, we found that vectorized execution could be applied to many other cases to improve the performance. For example:

We welcome you to join us in our vectorization campaign for built-in functions.

In a future post, we'll introduce how we use the vectorization idea to optimize other parts of the SQL execution engine. Stay tuned.