TiDB 4.0: An Elastic, Real-Time HTAP Database Ready for the Cloud

TiDB is an open-source, distributed, Hybrid Transactional/Analytical Processing (HTAP) database built by PingCAP and its open-source community. At TiDB DevCon 2020, the TiDB community's annual technical conference, more than 80 developers, TiDB users, and partners online from all over the world shared their first-hand development and practical experience with TiDB. The topics covered finance, telecommunications, e-commerce, logistics, video, information, education, medical care, and many other industries. At the meeting, we showed TiDB 4.0's general availability (GA) technical details and its performance in a production environment. More than 3,000 people signed up to watch the live broadcast and exchanged their ideas in the group.

This post is based on the keynote speech Max Liu, CEO at PingCAP, gave at this conference. The slides are here.

I've always believed that, in this day and age, databases should be more real-time, more flexible, and easier to use. TiDB 4.0, an elastic, cloud-native, real-time HTAP database, is exactly that kind of database, because it provides:

They are the most exciting and appealing characteristics to TiDB users. They distinguish TiDB from other databases.

Serverless computing is a very important concept in the field of cloud services. If you use a large-scale TiDB cluster, you might want to reduce costs. Now, with serverless capabilities, TiDB 4.0 can automatically scale in or out in Kubernetes based on your application load.

Serverless TiDB brings you these advantages:

In addition, TiDB can automatically scale based on your application needs to handle unpredictable workloads. For example, no one knows when a commodity will be hot. If you give the system permission to automatically scale based on the actual situation, this may be "life-saving" for a business, since human intervention is often too slow and too late. 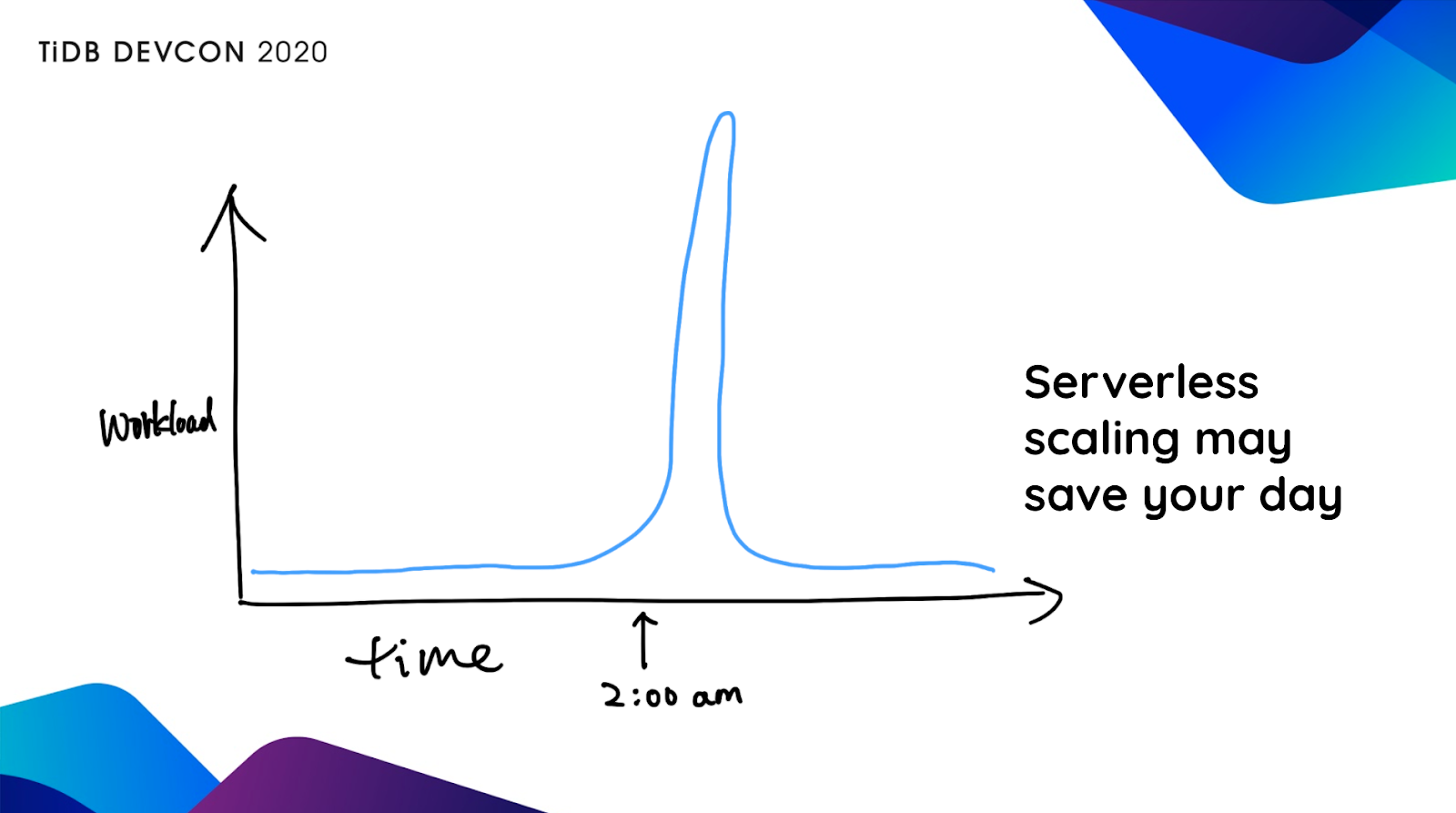 In TiDB 4.0, we introduce TiFlash, an extended analytical engine and columnar store for TiDB. A TiDB database that incorporates TiFlash lets you perform real-time HTAP analytics.

In today's world, everyone wants everything to be faster and simpler. But if you still use a database in the traditional way to gain insights from large volumes of data, you can't meet this "faster, simpler" demand. This is because in the traditional way, you need to go through a series of complicated processes to extract the changing information, events, and logs from the database and then analyze the data. In this process, a long delay often occurs. Working with outdated information can mean poor decisions and economic losses.

TiFlash is seamlessly integrated with TiDB, and it inherits TiDB's easy-to-maintain characteristics, such as online data definition language (DDL), seamless scalability, and automatic fault tolerance. And TiFlash can be synchronized with the row-store engine automatically in real time.

With TiFlash, TiDB 4.0 can be at least 10 times faster than TiDB 3.0 in scenarios with a large number of complex data analytics, and you never need to worry about data inconsistency. No matter whether TiFlash processes simple Online Transactional Processing (OLTP) workloads or complex Online Analytical Processing (OLAP) workloads, it always guarantees data consistency and freshness. It also can automatically scale in or out.

A case for real-time HTAP analytics

Now let's see an example. Look at the architecture diagram below. Almost all companies with a certain scale of data used this architecture. I know a TiDB user who once built a complex system like this architecture in a scenario with only dozens of TB of data. He did this just to be able to deal with OLTP workloads and make a report query. In this process, he had to connect to Kafka and an extract, transform, load (ETL) tool, reserialize the report query results, and then store the results in a storage system such as HBase. Is there a method to simplify the entire architecture? 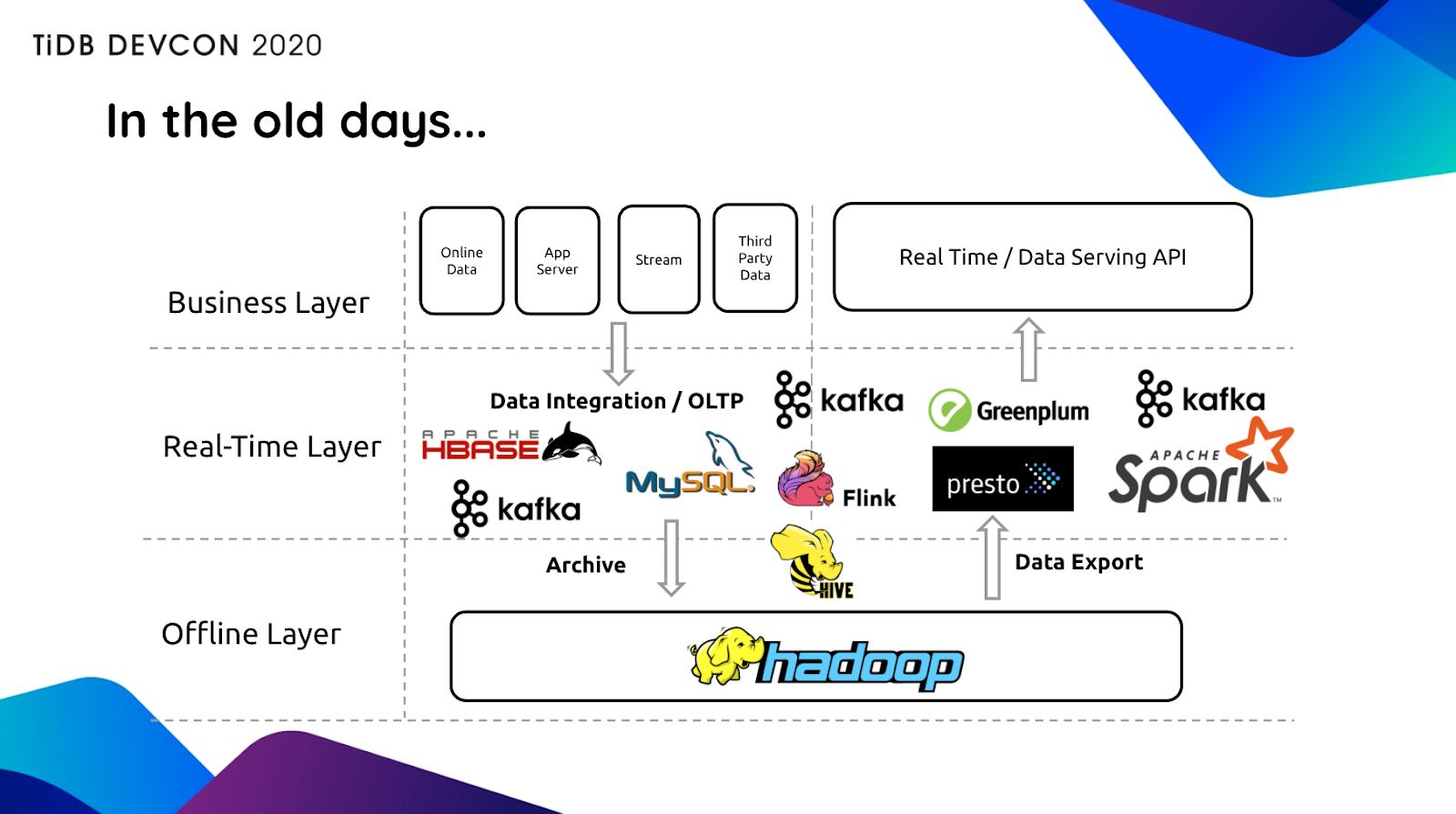 When we recommended TiDB 4.0 to them, they accepted and deployed it in their production environment. As shown in the diagram below, we put TiDB in the middle layer, and the system complexity was greatly reduced. 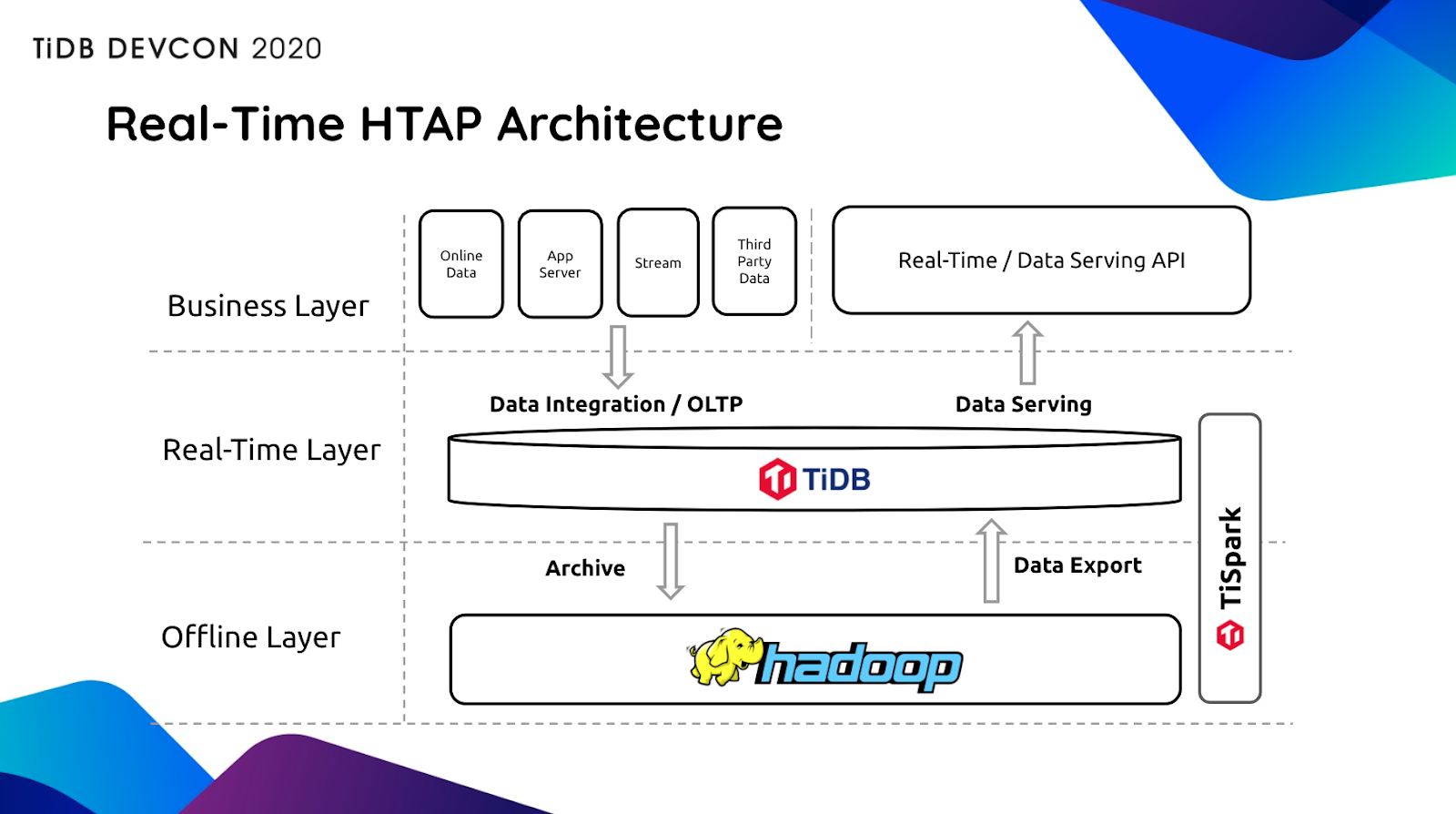 From the user's perspective, it doesn't matter whether a workload is a long or short query. To save costs, improve development efficiency, and create more value, users just want to get query results as soon as possible and reduce operation complexity as much as possible.

We're thrilled to release the beta version of TiDB Cloud, the fully-managed TiDB service delivered by PingCAP. TiDB Cloud is the easiest, most economical, and most resilient way to unlock the full power of TiDB in the cloud, allowing the users to deploy and run TiDB clusters with just a few clicks.

Two years ago, we began to develop TiDB Cloud. Today, it can seamlessly "dance in the cloud."

If you don't want to install or maintain TiDB, you can try TiDB Cloud. Currently, TiDB Cloud supports two cloud platforms, Amazon Web Services (AWS) and Google Cloud Platform (GCP). If you're using AWS or GCP, you can easily use TiDB with just a few clicks. It's truly an "out of the box" solution. We're also developing TiDB Cloud to make it support other cloud platforms. 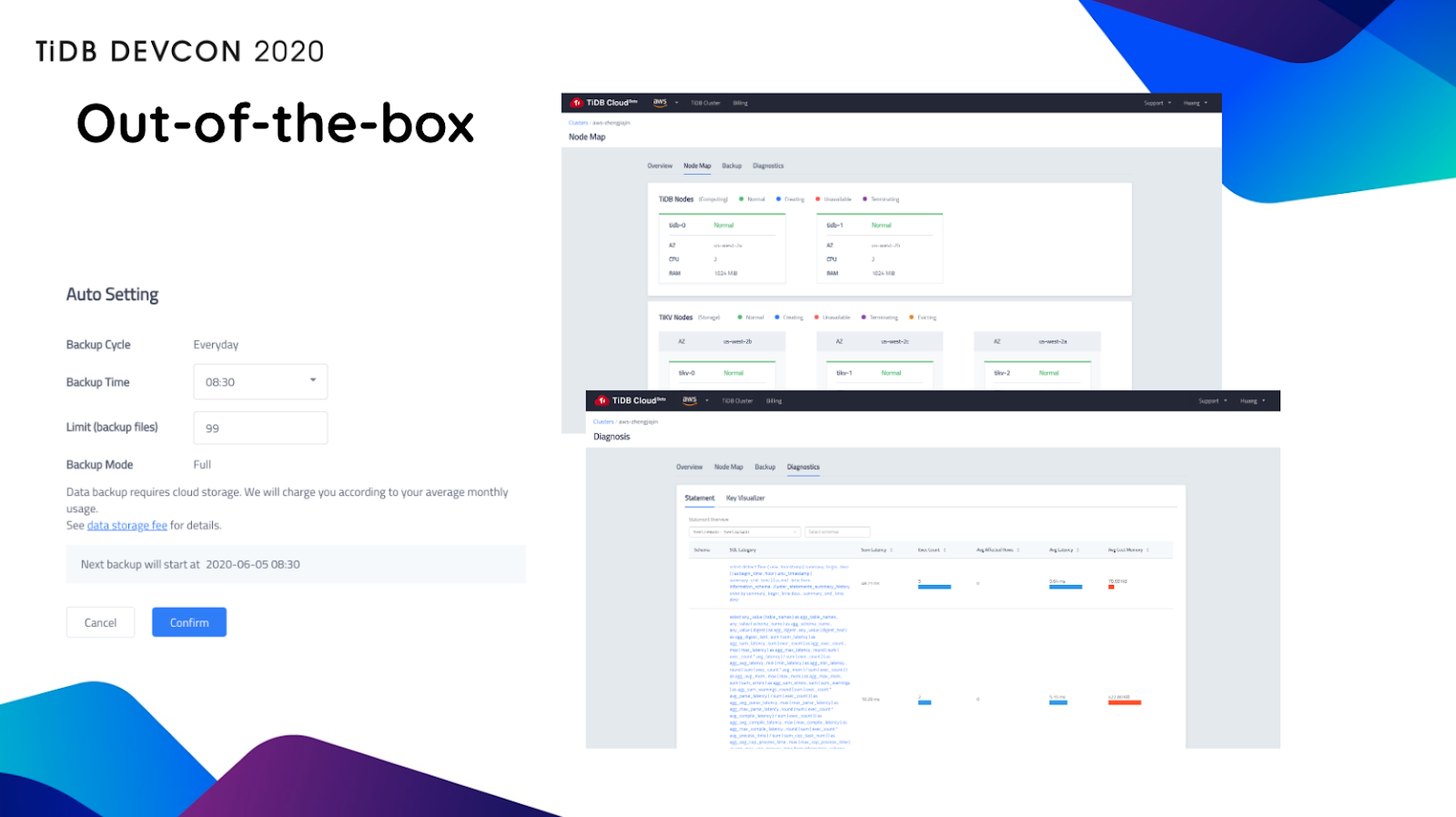 In TiDB 4.0, we introduce more than 70 new features. To learn more about them, you can read TiDB 4.0 GA, Gearing You Up for an Unpredictable World with a Real-Time HTAP Database.

TiDB 4.0 introduces TiDB Dashboard, a graphical interface with various built-in widgets that let you easily diagnose, monitor, and manage your clusters. In a single interface, you can check a distributed cluster's runtime status and manage the cluster. 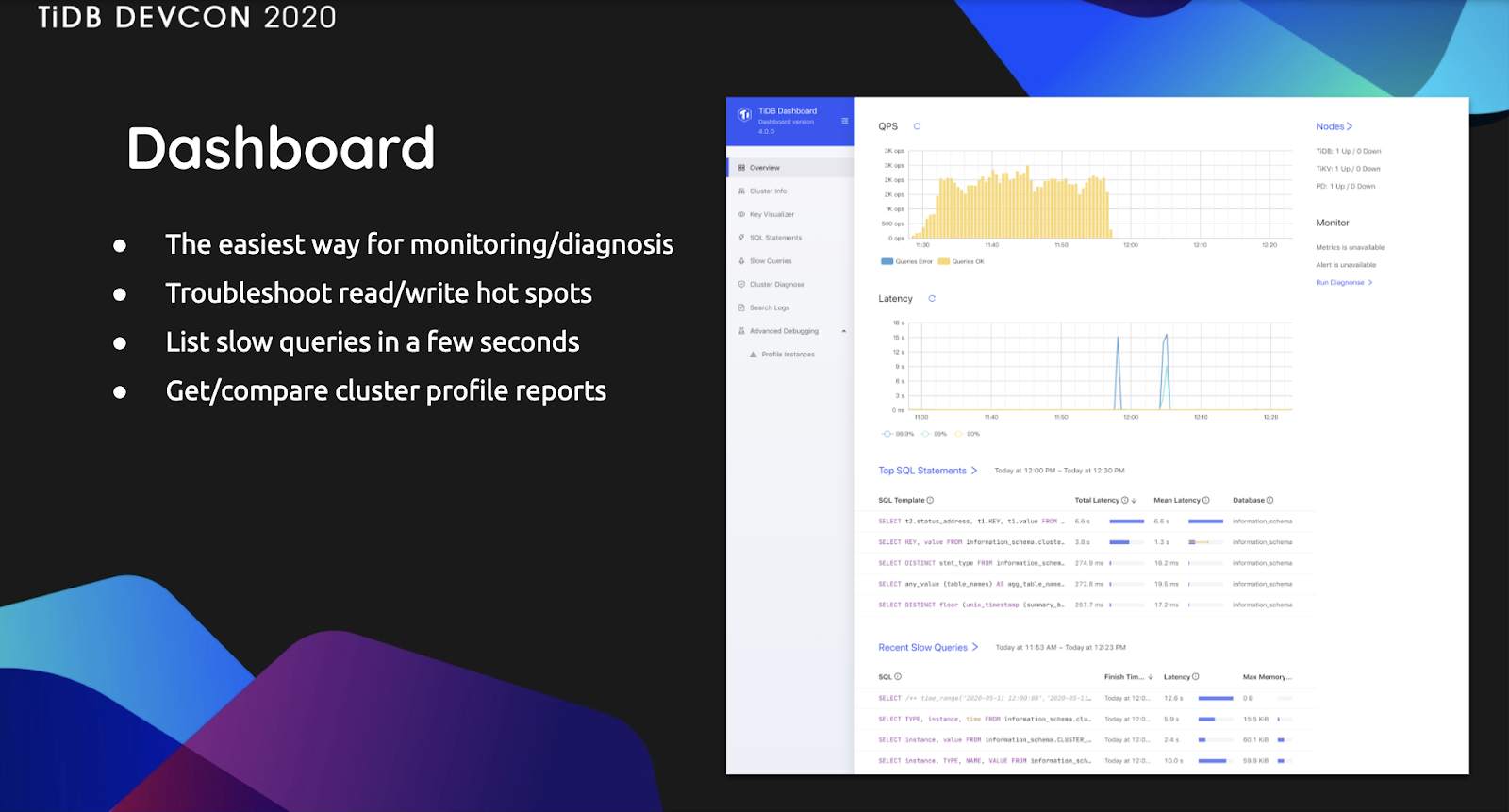 These achievements are attributed to contributions from the TiDB open-source community. At the end of 2019, we launched the TiDB Challenge Program, an on-going community effort to bring TiDB to a new level of stability, performance, and usability. A total of 165 participants joined in this campaign, including 23 teams and 122 individual developers. We'd like to thank them for helping us shape TiDB into a competitive product in the database industry.

TiUP: get a TiDB cluster up in only one minute

Some users told us TiDB could be challenging to install. It could take them from several hours to an entire day to deploy the system. Now, this is about to change. TiDB 4.0 introduces TiUP, a component manager that streamlines installing and configuring a TiDB cluster into a few easy commands. With TiUP, you can get your cluster up in just one minute! To deploy a 15-node production cluster, it takes only 45 seconds. Whatever your need or experience level, TiUP will get your cluster up and running quickly with a minimal learning curve. 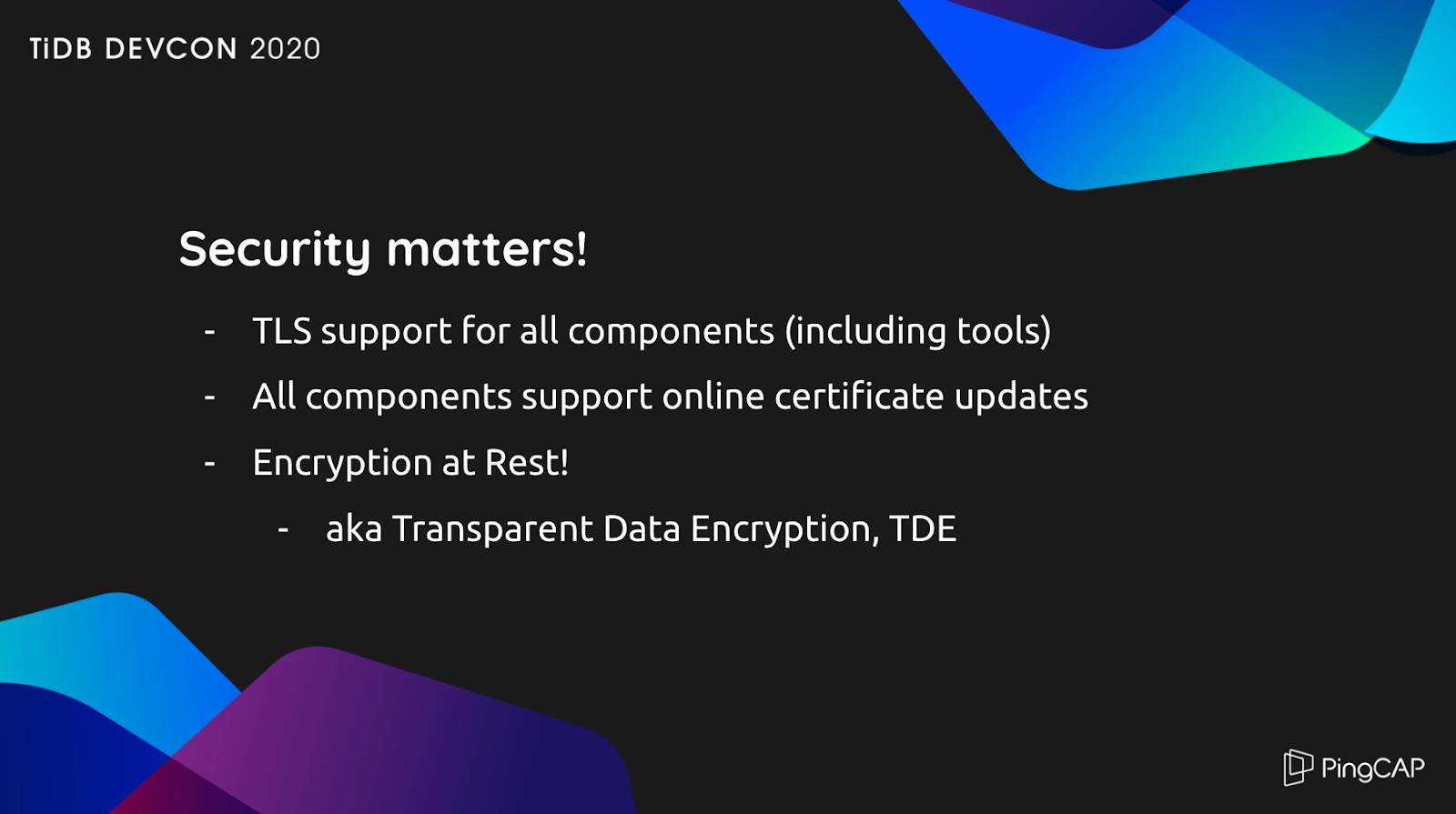 Not only are more enterprises using TiDB, they are using TiDB in more critical scenarios. There's a lot of focus on data security, so we provide security features to meet the security and privacy compliance requirements of each country.

In TiDB clusters (including the ecosystem tools), data is encrypted both in-flight and at-rest. Neither PingCAP nor any other cloud vendor can violate the data privacy or security of TiDB users. When TiDB runs in the cloud, no one can see the database, and no one can intercept the data from the communication process.

TiDB 4.0 is ready for production

You might wonder: is TiDB 4.0 really ready for production? Let's see a real-world case. Zhihu, which means "Do you know?" in classical Chinese, is the Quora of China: a question-and-answer website where all kinds of questions are created, answered, edited, and organized by the community of its users. It is China's biggest knowledge sharing platform.

Last year, Zhihu adopted TiDB in their Moneta application (which stores posts users have already read), and they published a post that showed how they kept their query response times at milliseconds levels despite having over 1.3 trillion rows of data.

Recently, Zhihu upgraded to TiDB 4.0. Their cluster has a capacity of 1 PB, and they've stored 471 TB of data in the cluster.

I was shocked when I first saw this, not only because of the data scale, but also shocked and moved by Zhihu's confidence in 4.0. They upgraded to TiDB 4.0 only four days after the GA release. When we saw this, our confidence grew stronger. TiDB not only supports such a large data scale, but more importantly, it has greatly improved the Moneta application's computing capability and reduced the system latency. 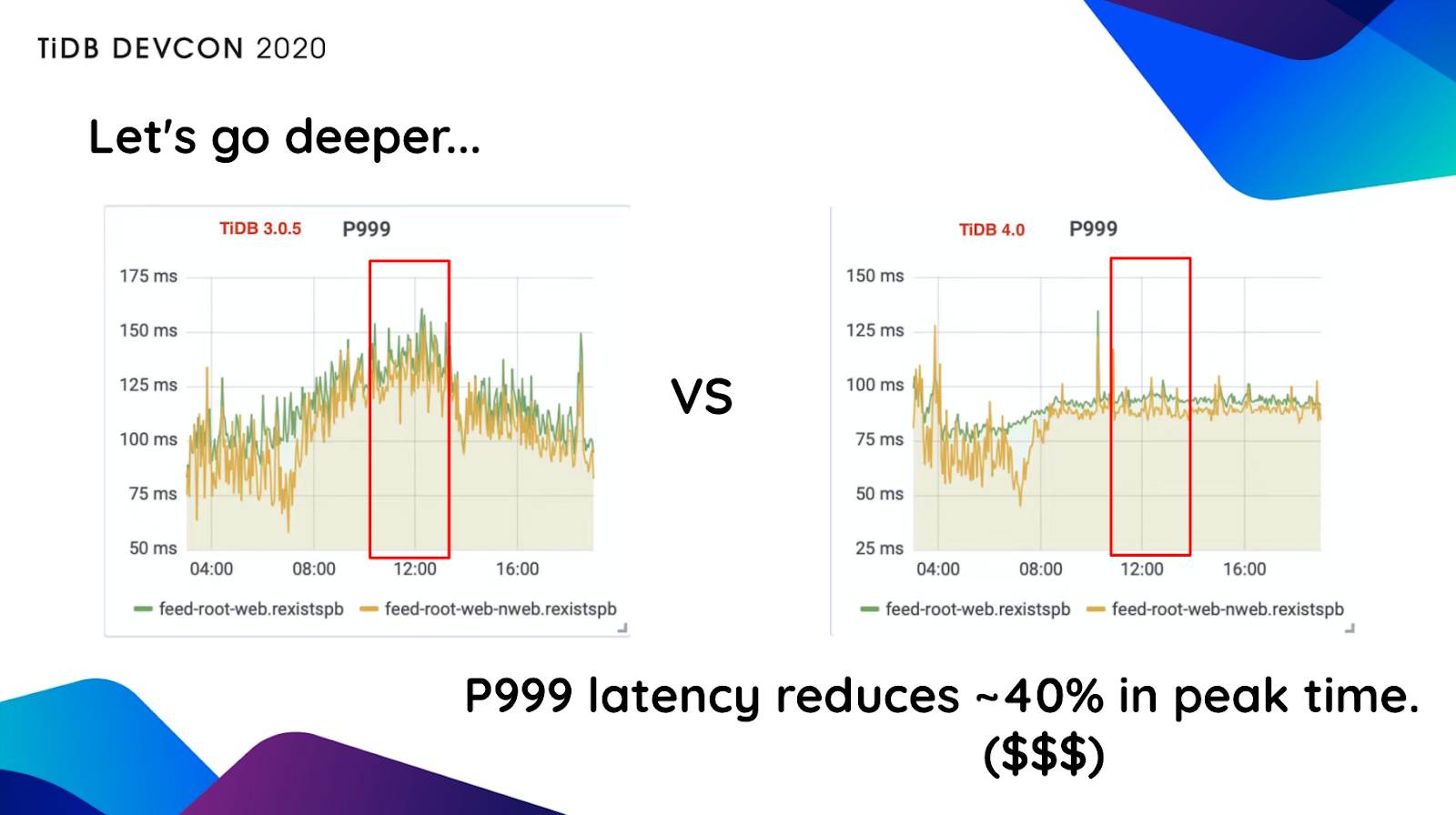 As we can see in these diagrams, compared with TiDB 3.0, TiDB 4.0 has reduced latency by 40%. In other words, if Zhihu maintains the same latency as before, they can reduce their costs by 40%.

Why is TiDB so popular?

In the last year, we were often asked, "Why is TiDB so popular?"

The TiDB project's stars on GitHub

We're grateful for the success of TiDB around the world and thrilled that our customers find TiDB so valuable. But the credit doesn't entirely belong to PingCAP. We gladly share it with the open-source community. After all, PingCAP is just part of that community. It's because of developers around the world—like Square, Azure, and Zoom in the United States and Dailymotion in France—who give us their feedback, file pull requests, and contribute code, that we can shape TiDB into what it is today and build TiDB's active open-source community. 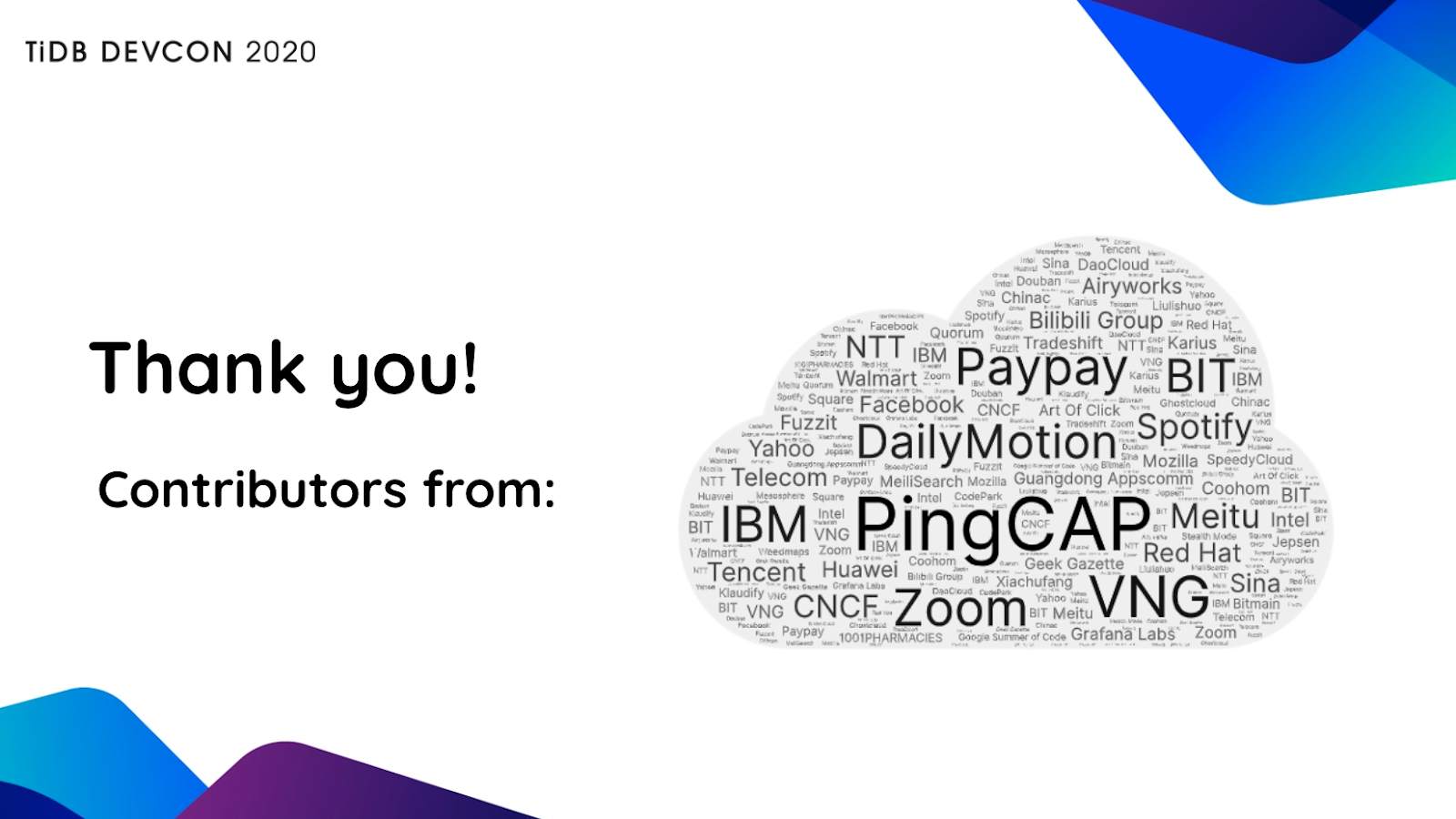 At the same time, what surprises me is the community's creativity. For example, TiDB Contributor Dongpo Liu visualized the top 100 contributors like this: 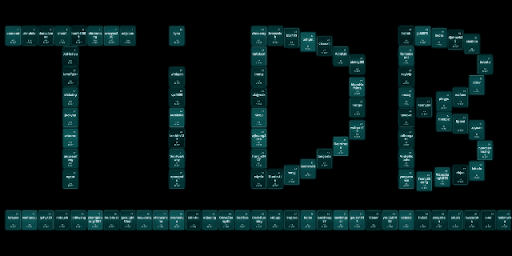 If you want to learn more about TiDB, you can attend online or offline training courses through PingCAP University.

You might be ambitious and want to write a distributed database of your own. No problem. Our Talent Plan program offers courses in how to build a distributed database's computing and storage layers step by step. There will be tutors from all over the world to help you review your code or tasks.

Finally, let's talk about our experience in chaos engineering. There is a common understanding in the software field that all foreseeable accidents will eventually occur. We must accept the fact that complex systems are unavoidable, and we must do our best to keep them stable and resilient. Today, the complexity of the entire system is not only limited to the database, but extends to all parts of the business, and ultimately settles in the quality of services the system provides to users. 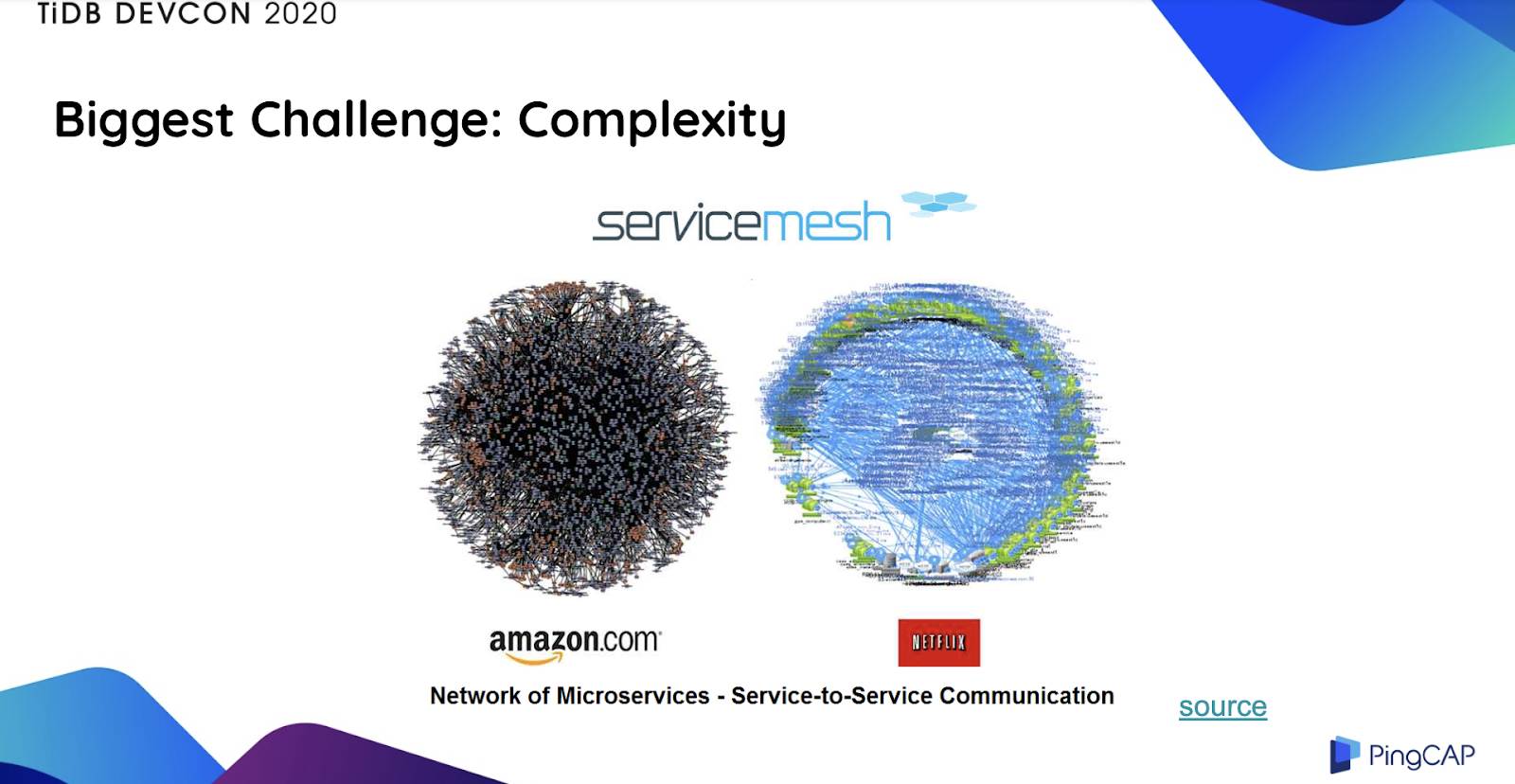 The figure above graphically represents the connections within Amazon's and Netflix's microservices. These connections are actually much more complicated than spider webs. Therefore, we need a system to simulate all possible faults, let the faults happen continuously, and take precautions to enhance the robustness of the system.

Therefore, when we were developing TiDB, we built a system called Chaos Mesh®, a cloud-native Chaos Engineering platform that orchestrates chaos experiments in Kubernetes environments. It features all-around fault injection methods for complex systems in Kubernetes, covering faults in the Pod, the network, the file system, and even the kernel.

For example, Chaos Mesh can simulate a disk failure. In our test environment, if the disk breaks every minute, the network is isolated every minute. Although this situation rarely occurs in reality, if it does, it causes a catastrophic failure. 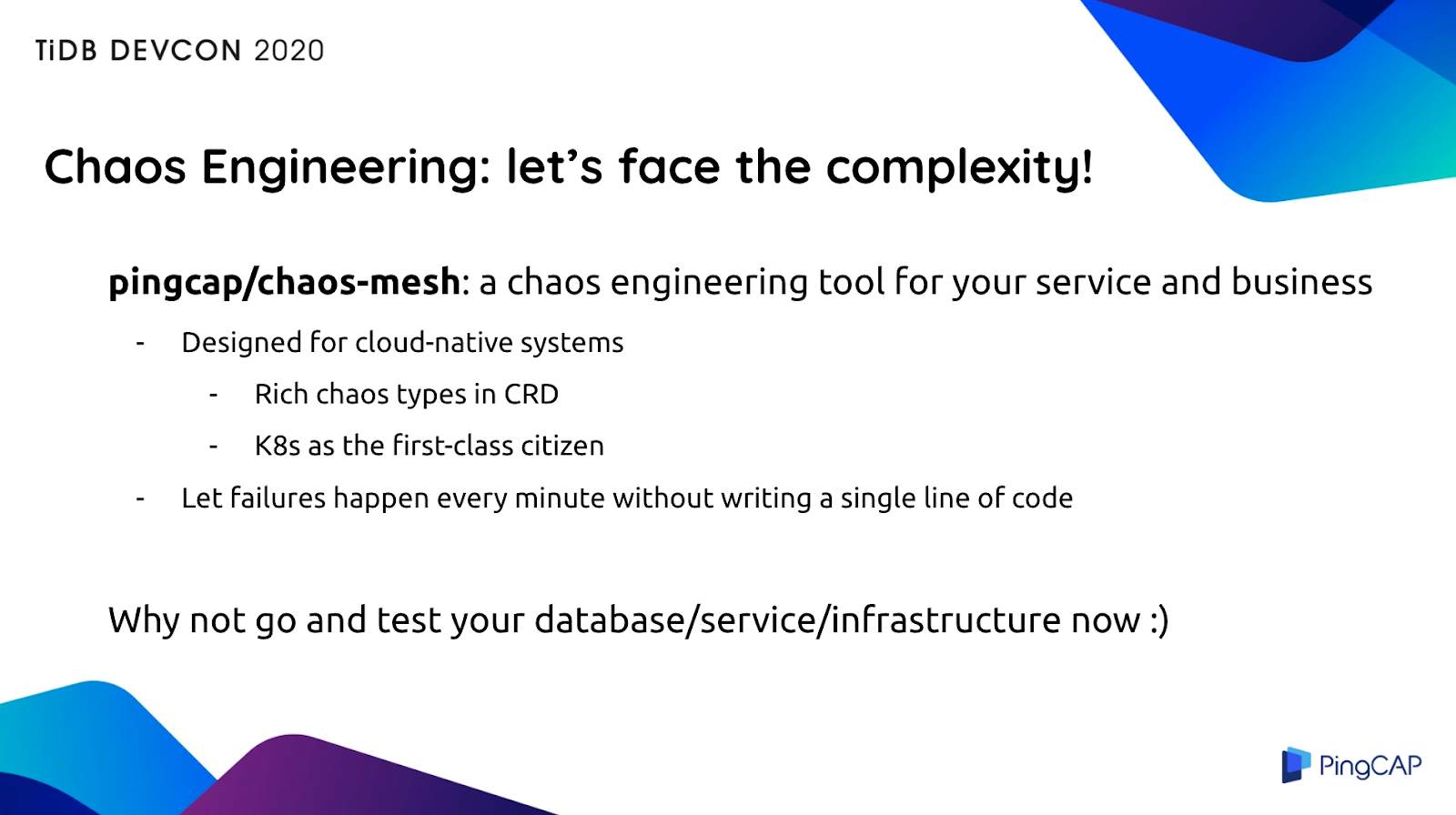 TiDB is no longer just a database product. It has become the cornerstone of many systems. Before you use it, you can refer to other people's experiences or solutions. We'll be posting more articles about TiDB DevCon 2020, so stay tuned.

You're welcome to try TiDB, join our community on Slack, and send us your feedback.