Therefore, to mitigate the performance degradation, the Linux kernel community introduced memory compaction to the kernel.

Before memory compaction, the kernel used lumpy reclaim for defragmentation. However, this feature was removed from v3.10 (currently the most widely used kernel version). If you'd like to learn more, you can read about lumpy reclaim in the articles I listed in A brief history of defragmentation. For now, let me bring your mind to memory compaction.

The white boxes are free pages, while those in red are allocated pages.

Memory compaction for this zone breaks down into three major steps:

This principle seems relatively simple, and the kernel also provides /proc/sys/vm/compact_memory as the interface for manually triggering memory compaction.

However, as mentioned in Part I and Memory compaction issues, memory compaction is not very efficient in practice—at least for the most commonly-used kernel, v3.10—no matter whether it is triggered automatically or manually. Due to the high overhead it causes, it becomes a performance bottleneck instead.

The open source community did not abandon this feature but continued to optimize it in subsequent versions. For example, the community introduced kcompactd to the kernel in v4.6 and made direct compaction more deterministic in v4.8.

When memory compaction is performed

In kernel v3.10, memory compaction is performed under any of the following situations:

In Why We Disable Linux's THP Feature for Databases, I described how THP slows down performance and recommended disabling this feature. I will put it aside in this article and mainly focus on the memory allocation path. 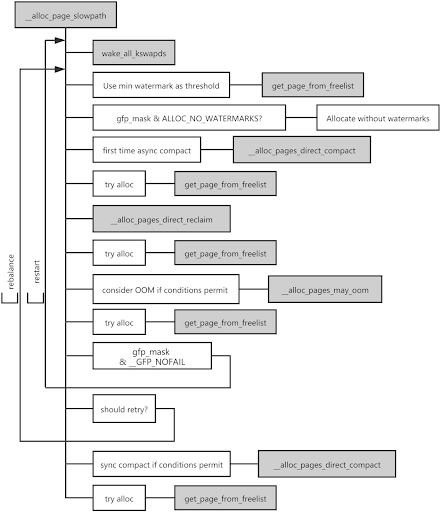 Memory allocation in the slow path

When the kernel allocates pages, if there are no available pages in the free lists of the buddy system, the following occurs:

The above steps are only a simplified description of the actual workflow. In real practice, it is more complicated and will be different depending on the requested memory order and allocation flags.

As for direct memory reclaim, it is not only performed by the kernel when the memory is severely insufficient, but also triggered due to memory fragmentation in practical scenarios. In a certain period, these two situations may occur simultaneously.

How to analyze memory compaction

Both tools are based on kernel events and come with detailed documentation, but there is one thing I want to note: to reduce the cost of introducing Berkeley Packet Filters (BPF), these two tools capture the latency of each corresponding event. Therefore, you may see from the output that each memory request corresponds to multiple latency results.

The reason for the many-to-one relationship is that, for older kernels like v3.10, it is uncertain how many times the kernel will try to allocate during a memory allocation process in the slow path. The uncertainty also makes OOM Killer start to work either too early or too late, resulting in most tasks on the server being hung up for a long time.

After the kernel merged the patch mm: fixed 100% CPU kswapd busyloop on unreclaimable nodes in v4.12, the maximum number of direct memory reclaims is limited to 16. Let's assume that the average latency of a direct memory reclaim is 10 ms. (Shrinking active or inactive LRU chain tables is time consuming for today's servers with several hundred gigabytes of RAM. There is also an additional delay if the server needs to wait for a dirty page to be written back.)

If the zone still needs compaction after one migration, the kernel loops the above process for three to four times until the compaction is finished. This operation consumes a lot of CPU resources; therefore, you can often see from the monitoring that the system CPU usage is full.

Well then, how does the kernel determine whether a zone is suitable for memory compaction?

If you use the /proc/sys/vm/compact_memory interface to forcibly require memory compaction for a zone, there is no need for the kernel to determine it.

Whether the kernel chooses to perform memory compaction or memory reclaim is determined by the external fragmentation threshold. You can view this threshold through the /proc/sys/vm/extfrag_threshold interface.

Both the monitoring interfaces based on the /proc file system and the tools based on kernel events (drsnoop and compactsnoop) can be used to analyze memory compaction, but with different pros and cons.

The monitoring interfaces are simple to use, but they cannot perform quantitative analysis on the latency results, and the sampling period is too long. The tools based on kernel events can solve these problems, but you need a certain understanding of the working principle of the kernel-related subsystems to use these tools, and there are certain requirements for the client's kernel version.

Therefore, the monitoring interfaces and the kernel-events-based tools actually complement each other. Using them together can help you to analyze memory compaction thoroughly.

How to mitigate memory fragmentation

The kernel is designed to take care of slow backend devices. For example, it implements the second chance method and the refault distance based on the LRU algorithm and does not support limiting the percentage of page cache. Some companies used to customize their own kernel to limit the page cache and tried to submit it to the upstream kernel community, but the community did not accept it. I think it may be because this feature causes problems such as working set refaults.

Therefore, to reduce the frequency of direct memory reclaim and mitigate fragmentation issues, it is a good choice to increase vm.min_free_kbytes (up to 5% of the total memory). This indirectly limits the percentage of page cache for scenarios with a lot of I/O operations, and the machine has more than 100 GB of memory.

The community apparently noticed the waste of memory as well, so the kernel merged the patch mm: scale kswapd watermarks in proportion to memory in v4.6 to optimize it.

Another solution is to execute drop cache at the right time, but it may cause more jitter to the application performance.

In Part I of this post series, I briefly explained why the external fragmentation affects performance and introduced the efforts the community has made over the years in defragmentation. Here in Part II, I've focused on the defragmentation principles in the kernel v3.10 and how to observe memory fragmentation quantitatively and qualitatively.

I hope this post series will be helpful for you! If you have any other thoughts about Linux memory management, welcome to join the TiDB Community Slack workspace to share and discuss with us.