GitHub Discussions: Bringing the Open Source Community Closer Together and All in GitHub

I use open source projects on GitHub every day, and I've often wondered:

Where do open source communities live?

Previously for different projects, I might have different answers in mind:

It wasn't until GitHub recently introduced the Discussions feature that I found my only answer:

For an open source project on GitHub, its community can be right on GitHub.

"People around the world are turning to open source—and to GitHub. It is becoming not only the home for developers, but a platform where people in many roles, doing diverse work, come to learn, engage with the community, and contribute to projects that advance the greater good." GitHub Octoverse 2020 Report

GitHub is a world-leading developer platform as well as a community-based project collaboration platform.

GitHub has over 56 million developers worldwide and they have added more than 1.9 billion contributions to GitHub projects over the last year.

Significantly, most of these contributions came from open source communities.

"Open source" is a way people interact, learn, and create with each other in the community.

However, is GitHub good enough to be the home base for open source communities where members can do all these things?

Whether you are a project maintainer or user, this question is worth pondering.

If you are a project maintainer, ask yourself:

If you are a user of open source projects, ask yourself:

To achieve these things, an open source community should have at least three components:

Previously, GitHub only provided Issues and Pull Requests for communities to interact.

Both pages are linearly organized, making them suitable for quickly merging code, but not for multi-threaded communication or building a community knowledge base.

Also, GitHub's Wiki is not a good place to collect fragmented content.

To conclude, GitHub itself was not able to provide the infrastructure for an open source community.

As a result, a project's community is scattered around the Internet.

Take a software project as an example:

The interaction of community members is so "distributed" that high-quality discussions and other content are dispersed across many platforms. The community is thus likely to become loose and unorganized, making it harder for newcomers to learn from the community.

If you have the same frustrations as I do, you can now breathe a sigh of relief.

GitHub recently introduced a new feature, Discussions, to bring together the "stray" parts of a community and put them closer to the source code—right in the project repository itself.

"Software communities don't just write code together. They brainstorm feature ideas, help new users get their bearings, and collaborate on best ways to use the software. …Conversations need their own place—that's what GitHub Discussions is for." GitHub Blog: New from Satellite 2020

Discussions is a beta feature that GitHub launched earlier 2020. At first, it was only open to a few select projects, such as Next.js and Office 365 CLI.

On Dec 8, 2020, GitHub announced that Discussions is officially available in beta for public repositories.

Every public repository can now enable it in Settings>Options>Features>Discussions.

The Settings page for enabling Discussions

When Discussions is enabled, it appears as a new tab in the repository page. (See the red box below.) It works like a unified forum where people share information, ask for help, and interact with the project maintainers. 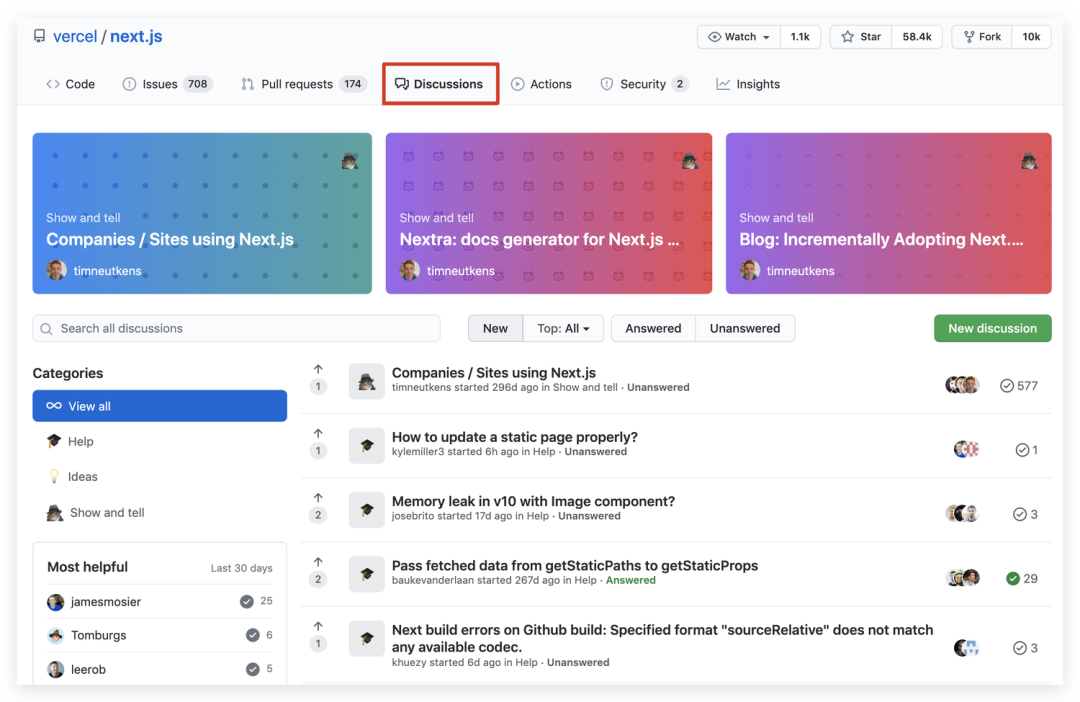 The Discussions page in the next.js repo

A discussion page is similar to an issue page, but Discussions also provides some additional features:

For project maintainers, Discussions can bring them the following benefits: 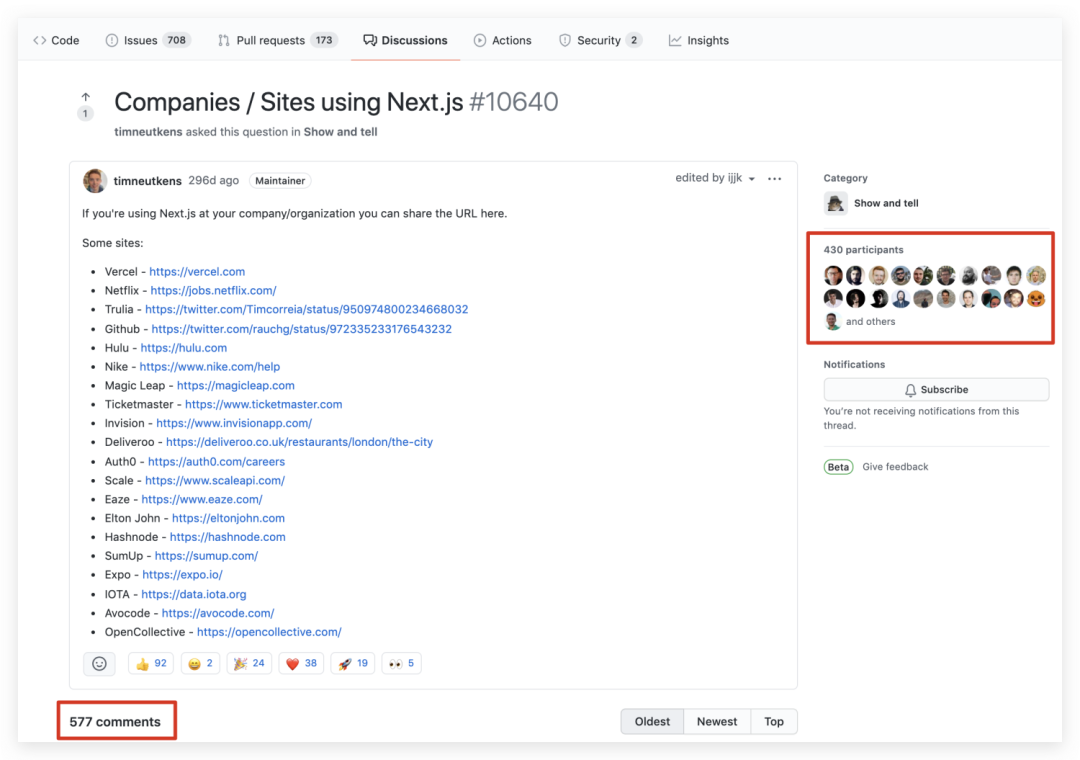 The adopter list discussion page in the next.js project

However, Discussions also has some downsides:

For users of open source projects, as far as I see, this feature seems only to be a good thing.

In the past, when project users had a problem, they might have taken these steps:

But now, their problem-solving procedure is probably like this:

Discussions is expected to become the first place where users seek solutions, because this is the only dedicated community for the project.

The future of open source communities

Now that there is Discussions, what will the GitHub open source communities look like in the future?

It is hard to answer, but we may get a glimpse of the future by reviewing the projects which already used Discussions for a long time.

In March 2020, Office 365 CLI team announced that they were going to disband their Gitter channel and migrate all future discussions to their Discussions page on GitHub.

According to the GitHub Octoverse 2020 Report, the next.js repository started using Discussions in January, 2020. By October, community members had opened over 3,000 discussions to communicate and collaborate. Almost half of those who have contributed to the repository used Discussions.

To encourage community members to discuss new features, next.js even migrated Request for Comments (RFC) proposals from Issues to Discussions.

See the members' reactions outlined in the red box below? This is a real "alive" community! 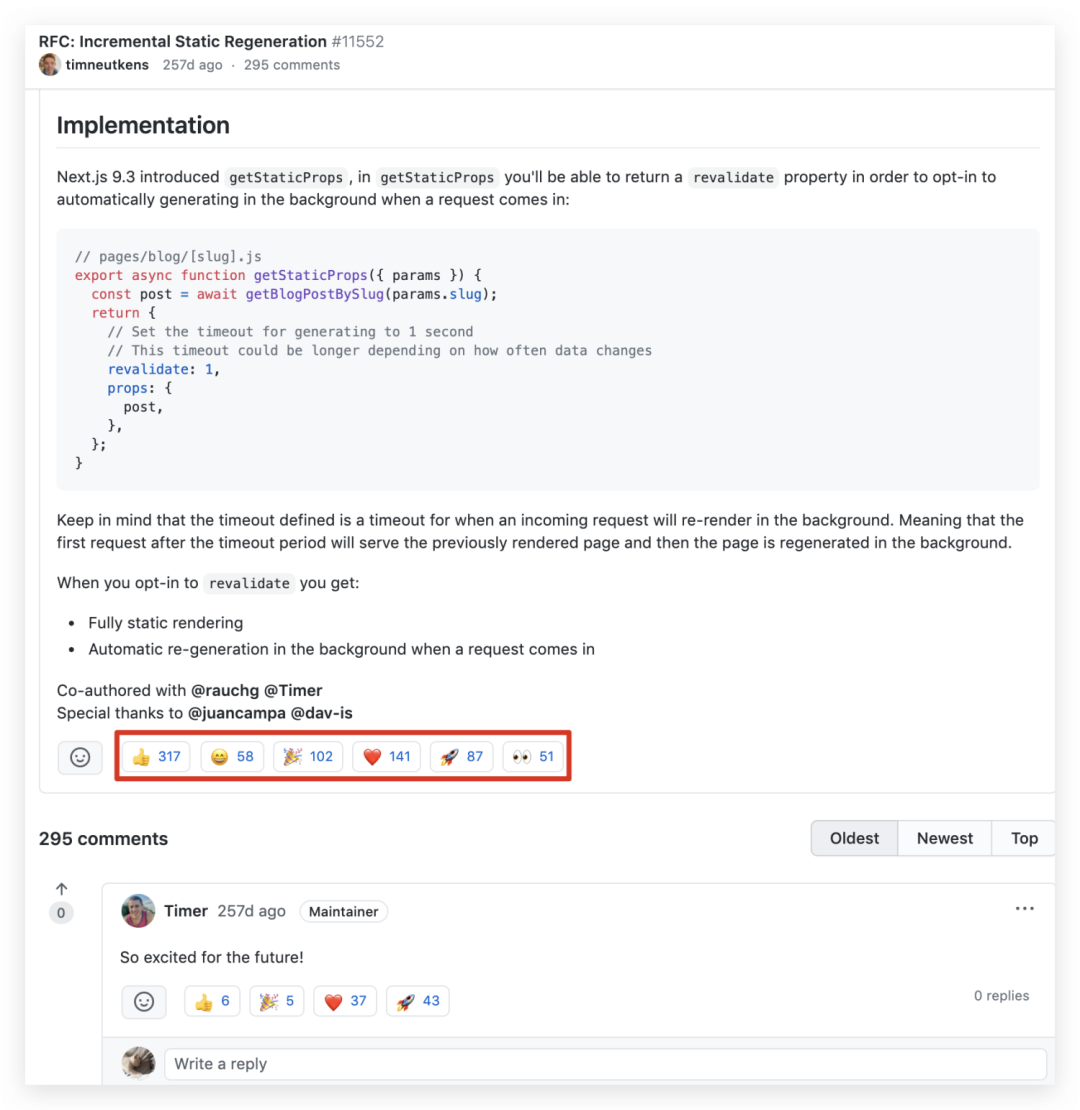 Currently, the next.js repository README only leads its community members to two places: Discussions and Discord. Discussions is for asking questions, discussing ideas, and sharing new projects, and Discord is for chatting.

The Community section on the next.js repository homepage

The above examples are a sign that the shape of open source communities is changing from scattered to more unified.

Having the community running in just one platform not only reduces the cost of participation for community members, but also, to some extent, relieves the stress on project maintainers.

It seems hopeful to me that the future of open source communities would be:

Every question and answer made by community members is a contribution to the community knowledge base, and every "👍" they left in the RFC discussion page takes its part in the project's decision making.

Every author of an open source project has probably dreamed of building an active, self-governed, and contributing open source community that accelerates good iterations of the project.

It seems that we are now one step closer to that dream.

Thinking beyond the feature

GitHub is an awesome product. It has introduced more useful and thoughtful features since its acquisition by Microsoft in 2018.

As a fan of GitHub, I am very glad that this company keeps expanding the possibilities of its product.

On Hacker News, however, some developers expressed their concern about the expansion of the "GitHub Kingdom":

I think they are doing great in terms of performance and UI. It's hard to resist the convenience of having everything linked together in a coherent way. But this will probably backfire in the future.

As more projects enable the Discussions feature, I expect that there will be more discussions regarding this concern and some backup plan to solve it.

For now, we need more time to see if this feature will blossom.