Backing up or restoring large-scale distributed databases is time-consuming. When it takes a lot of time to backup or restore a database, Garbage Collection might break the snapshot used in the backup or restore process. Thus, some changes might be missing. This threatens data safety.

In this post, I'll share how we use BR to improve backup and restore speeds for large-scale TiDB clusters. If you specialize in database development, this post might inspire your backup and restore design work. If your application deals with huge amounts of data and you also attach great importance to data security and the efficiency of backup and restore, you can try TiDB with BR.

TiDB is an open-source, MySQL-compatible, NewSQL database that supports Hybrid Transactional/Analytical Processing (HTAP) workloads. Backup and restore has long been a challenging problem for large-scale TiDB clusters. Because data is distributed in different nodes, TiDB doesn't have a consistent physical snapshot.

Mydumper and myloader are widely used as backup and restore tools in the MySQL community. Since TiDB is compatible with the MySQL protocol, we used them too.

However, mydumper does not work well with very large TiDB clusters. It cannot reasonably utilize cluster resources to improve backup speed. This seriously affects application requests. It might even cause TiDB's out of memory (OOM) errors.

We also had issues restoring data. We optimized Loader, a tool similar to myloader, for TiDB. According to our test, it took about 19 hours for Loader to restore 1 TB of data. This speed does not meet our requirement for high restore efficiency. The main reason is that we execute SQL INSERT statements to restore data. The whole process is long and involves too many unnecessary calculations. Therefore, resources cannot be fully utilized.

In short, although we can use mydumper and Loader, they do not perfectly meet our needs. Therefore, we developed a new backup and restore tool, BR.

BR is a command-line tool for fast distributed backup and restore of the TiDB cluster data. Compared with mydumper and Loader, BR is more suitable for TiDB clusters with 1TB of data or more.

First, however, it's helpful to learn a bit about TiDB's architecture. Inside the TiDB platform, the main components are as follows: 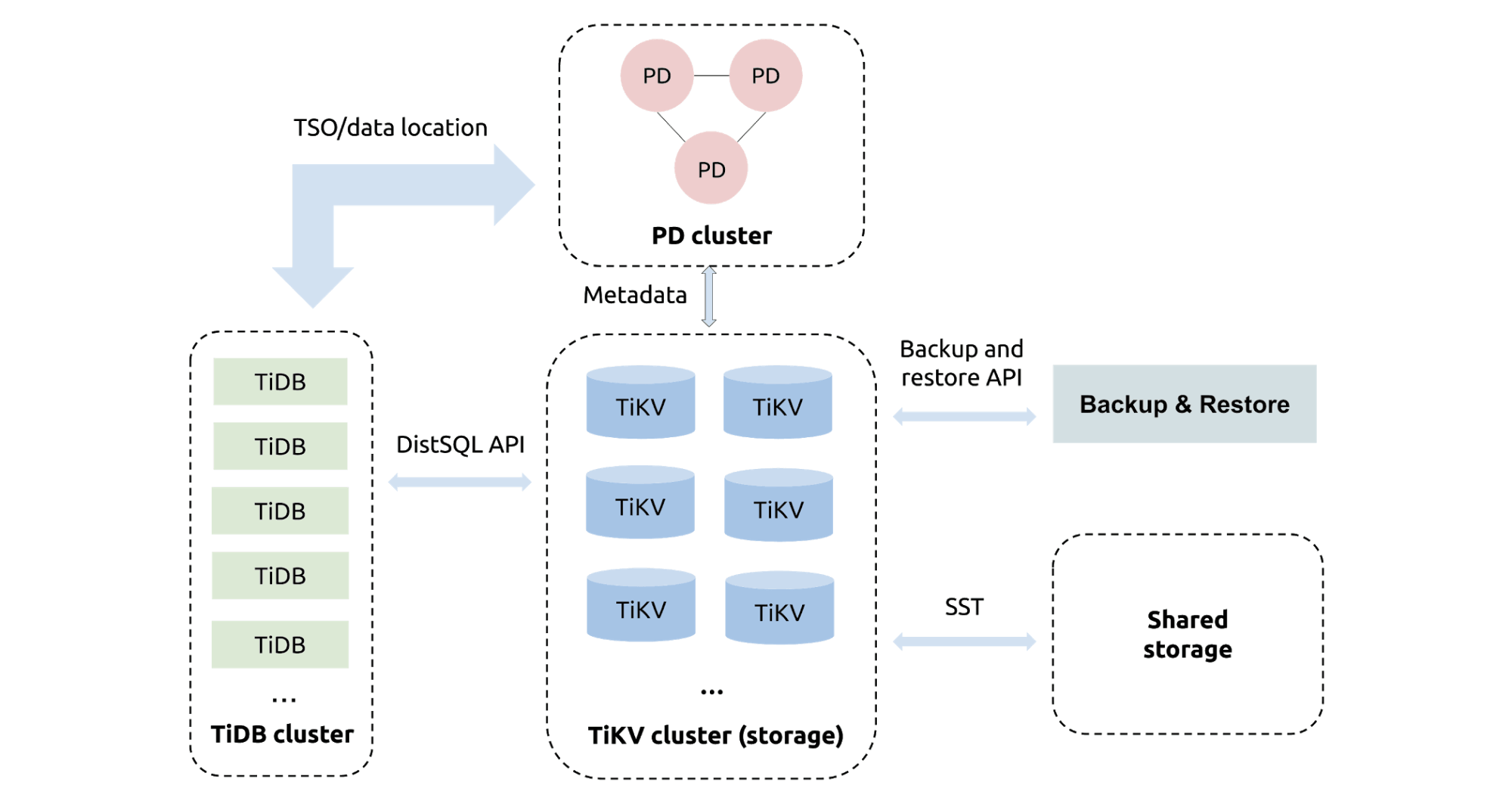 TiDB's storage engine, TiKV, stores data in basic units called Regions. In contrast to mydumper, BR pushes down backup and restore tasks to each TiKV instance for execution. If a backup task involves multiple Regions, BR only needs to send a request to each TiKV instance so that each instance can automatically back up its own data.

During data backup and restore, BR evenly distributes CPU and I/O pressures on each TiKV instance. This way, we can easily back up and restore a TiDB cluster with hundreds of instances.

Both TiDB and BR are strongly consistent and support snapshot isolation level consistency.

Data is distributed across multiple TiKV instances. To achieve snapshot isolation, BR only needs to get a timestamp of a TiDB transaction and send it to all TiKV instances. TiKV instances back up the data that we can read via this timestamp, including both user data and TiDB's metadata, such as table schemas. Therefore, BR backup achieves data consistency in both the storage layer (TiKV server) and SQL layer (TiDB server).

Benchmarks for a 10-TB data cluster

As shown in the figures below, BR was able to back up a cluster with 10 TB of data at an average speed of 2.7 GB/s, an average of 548 MB/s for the five TiDB instances. BR's maximum speed during the test was slightly over 4 GB/s, with the maximum backup speed for each instance ranging from 770 MB/s to 866 MB/s.

BR restored the 10-TB data cluster at an average speed of 0.7 GB/s, an average of 150 MB/s for the five TiDB instances. BR's maximum store speed during the test was about 1.2 GB/s, with the maximum restore speed for each instance ranging from 247 MB/s to 268 MB/s.

The following figures show the test's backup and restore speeds.

At 11:15 and 11:28, index data are backed up. Because index entries are short, the backup speeds decrease.

After backup, we restored the two tables. The green curve represents the overall restore speed, and the other curves represent the restore speed for each TiKV instance.

BR split restore tasks into multiple subtasks, and the subtasks were executed serially. So we can see glitches in the figure. They might be potential issues that need further optimization.

At 1:00 and 1:15, index data are restored. Because index entries are short, the restore speeds decrease.

If you're running a terabyte-scale TiDB cluster, and you want to quickly back up and restore data, give BR a try.

Here are some documents for your reference:

BR is still in the beta stage and will be generally available in our upcoming TiDB 4.0, which is about to be released later this year. If you find any problems using it, please feel free to file an issue.

What's next for Backup & Restore

TiDB boasts an active open-source community. Thanks to our creative contributors and PingCAP engineers for adding the following features to BR. These features are under development: